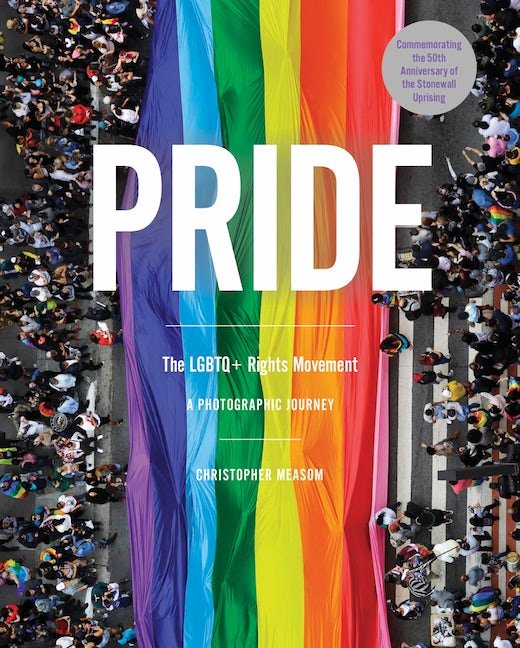 This lavishly illustrated book commemorates the 50th anniversary of the Stonewall Uprising and is an inspiring photographic journey through the LGBTQ+ Pride movement over the last century.

“A stirring history of the LGBTQ Pride movement.” —Publishers Weekly

This celebratory book is the most in-depth visual tribute to the LGBTQ+ pride movement ever created. The story starts in the bohemian subculture of post–World War I American cities. Author Christopher Measom next covers the influence of World War II, which relocated millions of people to single-sex barracks and factories, encouraging a freedom and anonymity that helped spark the formation of gay communities after the war. The repressive ’50s era saw the launch of two important rights organizations, the Mattachine Society and the Daughters of Bilitis, that led to the rebellions of the 1960s—culminating in the game-changing Stonewall Uprising of June 1969. The book then explores the devastation of the AIDS crisis, its impact on gay culture, and the fight to bring awareness to the disease. The narrative is brought up to the present day with coverage of the struggles for equality in marriage, the military, and beyond—and the push for gender rights. With more than 120 photos, posters, artworks, ads, and other rarely seen memorabilia; profiles of icons in the movement such as Christine Jorgensen, Marsha P. Johnson, Harry Hay, and Stormé DeLarverie; excerpts from key news reports; speeches by leading activists and political figures including Harvey Milk, Urvashi Vaid, and Barack Obama; and passages from important dramatic, musical, and literary works such as Larry Kramer’s The Normal Heart, this book is a groundbreaking homage to a historic movement and its milestone achievements and hurdles.

“Freelance writer and photographer Measom (Sex Libris) creates a stirring history of the LGBTQ Pride movement, exploring how historical events and the broader cultural zeitgeists helped to shape the LGBTQ experience years before the Stonewall uprising. Measom organizes the narrative by era, from the sexually liberated 1920s to the comparatively repressive culture of the 1950s and through the devastation wrought by the AIDS crisis in the 1980s. Measom presents a vivid photographic record, with images representing LGBTQ figures in hours of celebration (the first anniversary Stonewall march in 1970) and protest (ACT UP protesting in 1988). Archival materials enrich the narrative, including original poster art for events, Pride rallies, and organizations as well as excerpts from articles, speeches, interviews, and literary works. Sections also highlight the lives and contributions of well-known activists such as Marsha P. Johnson and Harvey Milk and entertainers such as Stormé DeLarverie, whose run-in with the police allegedly started the Stonewall riots. This stylish volume powerfully depicts how generations have sustained the Pride movement.” —Publishers Weekly -

Christopher Measom has been a freelance writer/photographer since 1994. He was senior writer at the travel newsletter Out & About for ten years and had a monthly column called “New York Metro Page” in the now-defunct Hero magazine. Measom’s books—co-created with partner-in-life Timothy Shaner—include Paris: Wish You Were Here!, The Little Big Book of Ireland, and Sex Libris. He is photo editor of the bestseller Michelle Obama: A Photographic Journey. He and Tim live in New York City.