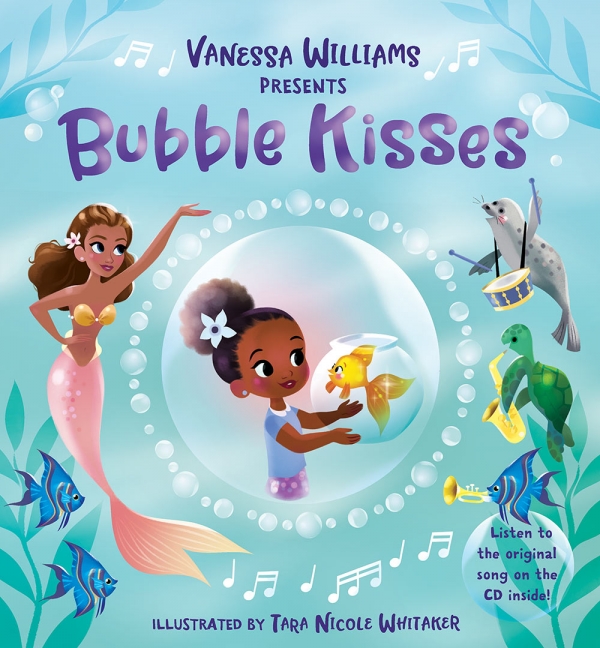 A young girl adores her goldfish, Sal. But Sal is no ordinary pet: while she can’t fetch a ball or curl up on a lap, she can give bubble kisses that transform the girl into a mermaid and transport her to a world of underwater adventures. There, beneath the sea, they play, sing, and dance with other mermaids. The catchy, breezy, rhymed tale is perfect for bedtime, and the book includes a free digital download and CD of the song.

Vanessa Williams is one of the most respected and multifaceted performers in the entertainment industry today.
Having sold millions of records worldwide, Vanessa has also achieved numerous #1 and Top 10 hits on various Billboard Album and Singles charts: Pop, Dance, R&B, Adult Contemporary, Holiday, Latin, Gospel, and Jazz.

Her critically acclaimed work in film, television, recordings, and the Broadway stage has been recognized by every major industry award affiliate including 4 Emmy nominations, 11 Grammy nominations, a Tony nomination, 3 SAG award nominations, 7 NAACP Image Awards, and 3 Satellite Awards. Her platinum single "Colors of the Wind," from Disney’s Pocahontas, won the Oscar, Grammy, and Golden Globe for Best Original Song.

A graduate of Syracuse University, Vanessa is a strong advocate for equal rights, especially concerning the gay community and minorities. She was honored with the Human Rights Campaign “Ally for Equality” Award for her humanitarian contributions. Vanessa also achieved a career pinnacle with a star on the Hollywood Walk of Fame in 2007.

Vanessa’s autobiography, You Have No Idea, cowritten with her mother Helen Williams, was a New York Times Best Seller in 2012. Her recent Broadway credits include costarring with Cicely Tyson in The Trip to Bountiful, (the #1 play of the 2013 season), After Midnight (2014), and a special limited engagement in Hey, Look Me Over at New York City Center in 2018.

Vanessa is the mother of four—Melanie, Jillian, Devin and Sasha. Her charitable endeavors are many and varied, embracing and supporting such organizations as Concerts for America, the Special Olympics, and several others.

Vanessa is one of the world’s most accomplished concert artists, appearing regularly with the most prestigious symphony orchestras in the world, most recently with the National Symphony Orchestra at The Kennedy Center.


Tara Nicole Whitaker’s education in art began early, from classes at Pratt in her youth to more formal training at RISD and California Institute of the Arts. She has designed for Dreamworks, Nickelodeon, Fox Animation, PBS, CBS, Cartoon Network, and Disney. She lives in Burbank, CA. Find her online at her website (taranicolewhitaker.com), on Twitter @nicoledessine, and on Instagram @taranicolewhitaker.