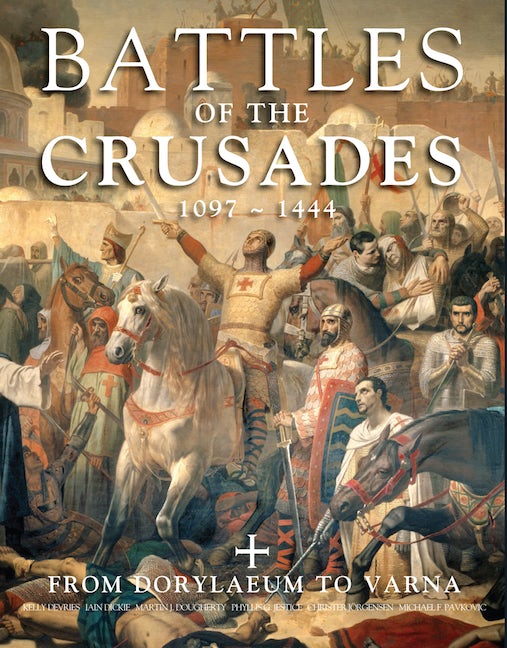 From Dorylaeum to Varna

From Dorylaeum to Varna

Beginning with the Dorylaeum (1097) and finishing with Varna (1444), Battles of the Crusades introduces 20 key fights from 500 years of conflict between Christianity and Islam.

Highly illustrated, and filled with art and maps, Battles of the Crusades covers examples from every era and campaign in this religious war—not only the well-known encounters in Antioch, Jerusalem, and Harran, but also the clash at Montgisard and Saladin’s destruction of the Crusader army at Hattin. Going beyond the Middle East, it includes the Christian recapture of Lisbon, the massacre of the Albigensians at Beziers in France, and the Reconquista of Spain, and the expansion of the Teutonic Knights. Each entry includes an introduction, a concise description of the action, and an analysis of the aftermath. Color maps illustrate the movement of forces and the development of the fighting. Designed for both general readers and enthusiasts, this book is essential for anyone interested in the warfare and tactics of the Middle Ages.

Kelly DeVries is Professor of History at Loyola College in Maryland. He has written several books, including Medieval Military Technology, Infantry Warfare in the Early Fourteenth Century, Joan of Arc: A Military Leader, and Guns and Men in Medieval Europe.

Iain Dickie has been a committee member of the Society of Ancients, the editor of Army & Navy Modelworld, Military Hobbies, and now Miniature Wargames magazine.

Martin J. Dougherty is a freelance writer and editor specializing in military and defense topics. His published works deal with subjects ranging from the history of small arms and naval warfare to private security and personal self-defense.

Christer Jorgensen has a PhD from University College, London. An expert on military history, Jorgensen has published various books on the history of European warfare. Based in London, he has also contributed to Battles that Changed Warfare and Tank Combat.

Michael F. Pavkovic earned his PhD from the University of Hawaii at Manoa. He currently serves as an associate professor of strategy and policy at the US Naval War College in Newport, RI. He is coauthor of What Is Military History? and has published on a variety of subjects in military history.