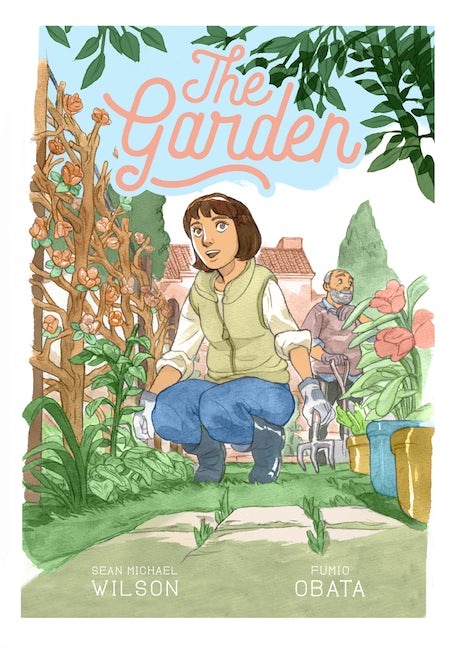 A graphic novel about healing through mindfulness and gardening by two highly acclaimed creators.

I have happily forgotten what used to concern me
before all this.
I am the strongest thing in the world.
I have an infinity of precious details
to smile upon.

Quiet and meditative, The Garden is a story told in manga about one woman’s spiritual and emotional growth. Following a breakdown, Joanna takes medical leave from her job in a high-powered finance firm. Seeking something meaningful in her life, she travels to Japan to immerse herself in Zen gardening and meditation before returning home to nurture her own Japanese garden . . . and her soul. Two powerful and admired creators—award-winning writer Sean Michael Wilson and graphic-novel artist Fumio Obata—have created a powerful story of healing and recovery.

Sean Michael Wilson is a graphic-novel writer living in Scotland and Japan. He has published more than 20 books, including The Many Not the Few and Parecomic (with an introduction by Noam Chomsky). His book The Faceless Ghost was nominated for the prestigious Eisner Book Awards, and Secrets of the Ninja won an International Manga Award from the Japanese government; he was the first British person to receive this award. He has written articles for The Japan Times, The London Economic, The Herald Scotland, and others.

Fumio Obata is an illustrator and animator whose style is influenced by both Japanese and European aesthetics. His latest graphic novel Just So Happens was critically acclaimed and has been published in eight languages.