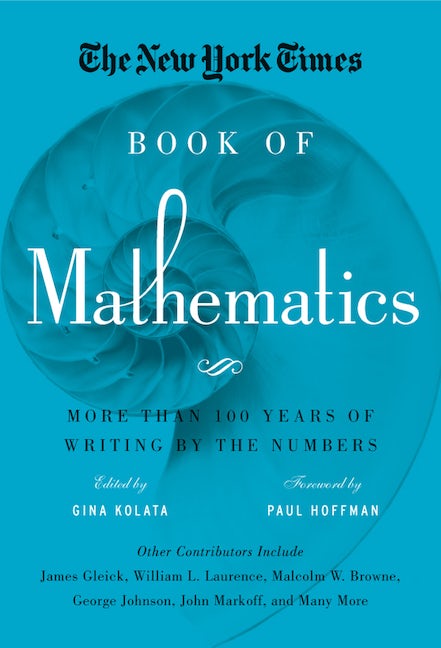 More Than 100 Years of Writing by the Numbers

More Than 100 Years of Writing by the Numbers

From the archives of the world's most famous newspaper comes a collection of its very best writing on mathematics. Big and informative, The New York Times Book of Mathematics gathers more than 110 articles written from 1892 to 2010 that cover statistics, coincidences, chaos theory, famous problems, cryptography, computers, and many other topics. Edited by Pulitzer Prize finalist and senior Times writer Gina Kolata, and featuring renowned contributors such as James Gleick, William L. Laurence, Malcolm W. Browne, George Johnson, and John Markoff, it's a must-have for any math and science enthusiast!

“From party conversation fodder to the esoteric, topics and authors appear and reappear all in the articulate, clever voice that can be expected from the New York Times…Many fascinating problems are explained in language that the layperson will understand, without relying on equations; those with more than a passing interest in mathematics will find many topics of interest worthy of further reading. This compilation of real-world applications will interest those with an inclination toward mathematics or problem-solving.” —Publishers Weekly
“Collecting articles of a mathematics bent from three centuries of pieces found in America's most celebrated daily newspapers, Kolata (senior writer, New York Times, Flu: The Story of the Great Influenza Pandemic of 1918 and the Search for the Virus that Cause It) displays her expertise as an editor in a book that is both a history of modern mathematics—as an academic, social, and political phenomenon—and a Who's Who of great science/math writers . . . The book is divided into thematic sections and . . . Among topics covered are the National Security Agency's (NSA's) threats to mathematicians writing papers with code-breaking applications; the celebrated story of Andrew Wiles's proof of Fermat's Last Theorem; Grigori Perelman's confirmation of the Poincare conjecture and his subsequent, Bobby Fischer-like, disappearance. These articles, both feature pieces and news reports, were all written at the time of what they cover, thus offering an immediacy lacking in some popular histories. Some of the pieces included here are important and some are curiosities, but all are absorbing. Verdict: Recommended for casual and serious math enthusiasts.”—Library Journal
-

Gina Kolata is a senior writer at the New York Times, where she reports on science and medicine; a bestselling author; a frequent lecturer; and a two-time Pulitzer Prize finalist. She has written several books, including Rethinking Thin: The New Science of Weight Loss—and the Myths and Realities of Dieting (Farrar, Straus and Giroux), which was a finalist for the Quill book awards, and the national bestseller Flu: The Story of the Great Influenza Pandemic of 1918 and the Search for the Virus that Caused It (Farrar, Straus and Giroux).
Paul Hoffman is the host of the PBS television series Great Minds of Science and the president and CEO of Liberty Science Center in Jersey City, New Jersey, as well as the author of several books including King's Gambit: A Son, a Father, and the World's Most Dangerous Game (Hyperion) and the international bestseller The Man Who Loved Only Numbers: The Story of Paul Erdös and the Search for Mathematical Truth (Hyperion). He was the editor in chief of Discover for 10 years as well as president and publisher of Encyclopedia Britannica, and is a puzzlemaster (under the pseudonym Dr. Crypton) and a class-A level chess player.