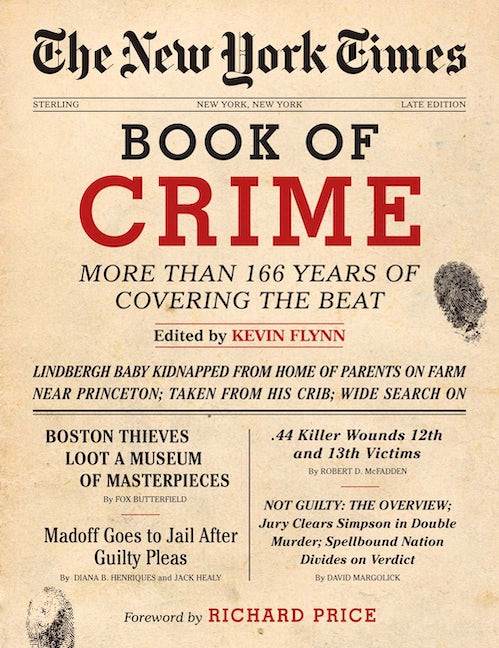 More Than 166 Years of Covering the Beat

More Than 166 Years of Covering the Beat

From the archives of The New York Times, 165 years of the most notorious real-life crimes.
For 166 years, The New York Times has been a rich source of information about crime, its reporters racing alongside tabloids to track the shocking incidents that disrupt daily life. This fascinating compilation, edited by seasoned Times crime-beat veteran Kevin Flynn, captures the full sweep of the newspaper’s coverage of the subject—from the assassinations of icons like Lincoln, John F. Kennedy, and Malcolm X to the deadly trails left behind by serial killers like H. H. Holmes (America’s first recognized serial killer), the Son of Sam, and Jeffrey Dahmer. This comprehensive review examines issues like incarceration, organized crime, and vice—from the Attica riot to the powerful Medellin Cartel—as well as the infamous crimes that riveted the world. The kidnappings of Jaycee Dugard and the Lindbergh baby. The Manson murders. The robberies that exasperated law enforcement, from bank heists by Dillinger to the enduring mystery of the greatest art heist in American history at Boston’s Isabella Stewart Gardner Museum. White-collar crimes from Ponzi to Madoff. Crimes of passion, such as Harry Thaw’s dramatic shooting of Stanford White, his rival for the charms of the beautiful Evelyn Nesbit. Chapters are organized by topic and include explanatory material by Flynn to provide context. The book features more than 70 photographs as well as reproductions of front-page stories. Although the focus is on the US, important international stories are included.

*“The great virtue of all these pieces is the immediacy of breaking news, now read with the hindsight of history. Wonderfully well executed.” —Booklist, Starred review

“Some of the most noteworthy, heartbreaking, intriguing stories that have bled and led throughout the paper's 166-year history.”—The New York Times

*“Whether the reader dips in or reads the book straight through, this will be a treat for fans of true crime and the history of journalism.”—Library Journal (Starred review)
-

Kevin Flynn is an investigative editor whose work has helped earn The New York Times numerous awards, including a 2009 Pulitzer Prize. He served as the newspaper’s police bureau chief from 1998 to 2003 and, in 2005, he cowrote with Jim Dwyer 102 Minutes: The Unforgettable Story of the Fight to Survive Inside the Twin Towers (Henry Holt), a bestseller that was a National Book Award nonfiction finalist.

Richard Price is a bestselling author of nine novels, including Clockers (Macmillan), The Wanderers (Houghton Mifflin), Freedomland (Random House), and Lush Life (Macmillan). He wrote several episodes of HBO’s The Wire, and is also the cowriter of the acclaimed HBO miniseries The Night Of.