The classic collection of writings by second-century Roman emperor Marcus Aurelius, now distinctively packaged with a beautifully designed jacket by noted illustrator Malika Favre.
A compendium of ruminations and reflections by the second-century Roman emperor Marcus Aurelius, a staunch adherent to the Stoic philosophy. It is a spiritual journal of the author’s philosophical exercises and a chronicle of the paradox of the philosopher-king, who must enforce the law and administer justice while looking beyond politics to the cosmic vantage point from which the tribulations of politics come to seem trivial. 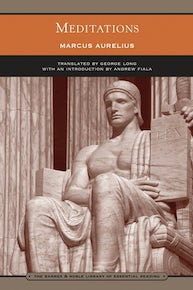