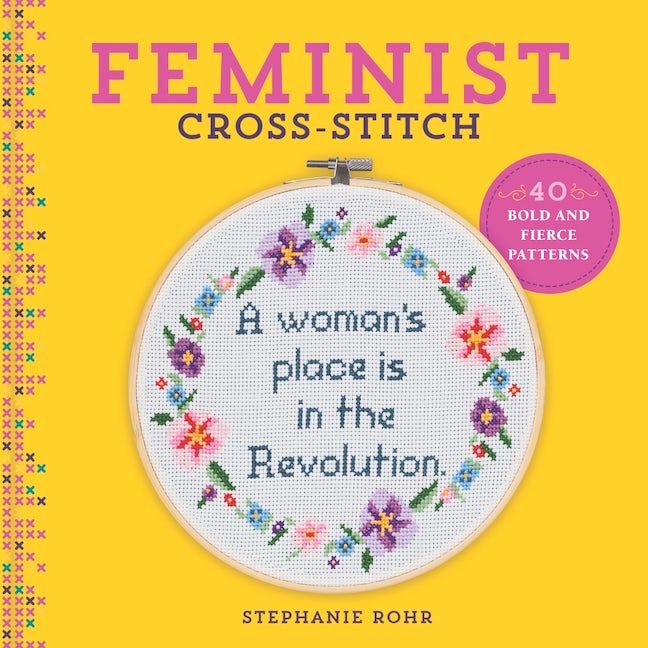 Make a statement—and smash the patriarchy, one stitch at a time—with these 40 feminist-themed cross-stitching patterns!

Crafty activists will love this snarky book with its 40 irreverent, vintage-inspired cross-stitch patterns. Whether you want to proudly announce to the world that you're a nasty woman or remind others that a woman's place is in  the revolution, you’ll find edgy slogans, sharp one-liners, and cheeky images that make fabulous wall art or wonderful handmade gifts. An illustrated basics section will get you started, with information on materials, tools, techniques, and framing your finished pieces.

“’Nasty women’ will find much to cross-stitch in Rohr’s sharp-needled pattern book of designs for ‘craftivist’ feminists. After a childhood of traditional cross-stitching, Rohr began her ‘subversive’ cross-stitch career in 2010, moving it into higher gear after the 2016 presidential election. She declares that cross-stitch, once dismissed as mere ‘women’s work,’ is now being acknowledged both as an art form in its own right and as a way for crafters to ‘express their opinions, show support for marginalized groups, and protest.’ Rohr begins the book’s instructional component by clearly covering the basics: Aida cloth, DMC floss, large-eyed tapestry needles, and hoops for tautness and/or framing. The 40 patterns fill chapters from ‘Stitched Affirmations’ (‘Believe Women’ and ‘Smash the Patriarchy’) to ‘Sassy & Subversive’ (‘Don’t Tell Me to Smile’ resembles folk art); from ‘Politically Active’ (with quotes from Michelle Obama, Emmeline Pankhurst, and Maxine Waters, among others) to ‘Feminist Iconography’ with rainbow flags. Each pattern is marked with a cross-stitch icon denoting the project’s difficulty level, ranging from one to six stitches, with the toughest project being, fittingly, a Rosie the Riveter pattern. Each design is clearly graphed, and Rohr encourages free adaptations. The patterns, ‘bold and fierce’ indeed, will speak to stitchers who share Rohr’s spirit and convictions.” —Publishers Weekly

“Like feminism, cross-stitch is for everyone, Rohr says in her first book of patterns. These creations follow the subversive cross-stitch theme first popularized by Julie Jackson (Subversive Cross Stitch, 2006): simple, traditional-looking patterns expressing surly sentiments. Standouts here include a folk-art inspired ‘Don't Tell Me to Smile’ and a sweet, floral pattern that proclaims ‘A woman's place is in the Revolution’ For crafters who appreciate Rohr's sense of humor, the rampant profanity (e.g., ‘Feminist as Fuck’) won't be a problem, and there are plenty of patterns that, like ‘Reclaiming my time,’ are G-rated. The skill level required for each pattern is indicated, and the difficulty level progresses from those for beginning stitchers that use just a few colors to an impressive Rosie the Riveter for pros. Instructions and supply resources are well covered. Feminist Cross-Stitch is very much on-trend as a new generation discovers the joys of needlework, and libraries looking to freshen up their craft collections should start here.” —Booklist

“Stephanie’s book is a treasure—like having a best friend by your side teaching you the craft step by step. She truly understands the therapeutic value of reclaiming what was once traditional ‘women’s work’ as a modern, empowering medium. Her designs are spot-on and well executed with clear, encouraging instructions. There are very few people who really ‘get’ subversive cross-stitch the way Stephanie does.” —Julie Jackson, founder of Subversive Cross Stitch
-

Stephanie Rohr—known in the craft world as stephXstitch—has been designing cross-stitch for over 10 years, and she started her business stephXstitch in 2010 (stephxstitch.com). Stephanie's designs have been featured on Cross-Stitcher magazine, Mr. X-Stitch, Huffington Post, BuzzFeed, Bust, and more. Stephanie lives in Chicago.