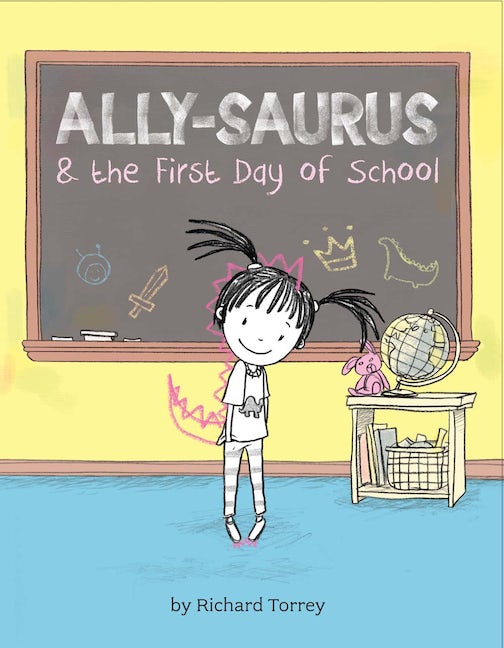 Ally-saurus & the First Day of School

Ally-saurus & the First Day of School

You can call her Ally-SAURUS! When Ally roars off to her first day at school, she hopes she'll meet lots of other dinosaur-mad kids in class. Instead, she's the only one chomping her food with fierce dino teeth and drawing dinosaurs on her nameplate. Even worse, a group of would-be "princesses" snubs her! Will Ally ever make new friends? With its humorous art, appealing heroine, and surprise ending, this fun picture book celebrates children's boundless imagination.

“A little girl with a dino-sized imagination joins, and learns to get along with, other kids with their own particular styles on the first day of school. Ally's a young girl who knows what she likes: dinosaurs. In fact, her scribbly black-and-white figure is surrounded by crayoned pink spines running down her head and back to her tail, and her feet have pink claws. But will she meet any other dinos at school? ‘I think you're going to make a lot of new friends,’ her mother reassures her. It takes a while for the other kids' imaginations to overcome their first-day nervousness, but slowly, their outlines also take on hues and costumes: an astronaut, three princesses, a dragon, a lion, and bespectacled Walter, who loves his new briefcase-shaped lunchbox. Recess is spent acting out these fantasies, and an end-of-the-day trip to the library just may prompt some new adventures for tomorrow. Torrey nicely tackles lots of first-day issues in this imaginative offering—making friends, getting along, keeping an open mind, the everyday routines of kindergarten—and he does so with aplomb. Pastel backgrounds make the multiethnic figures stand out, especially their brightly colored imagined costumes. Ally is an empathetic guide for young children facing their own first days, no matter what or who they imagine themselves to be.” —Kirkus Reviews (STARRED)

“Ally has a dinosaur alter ego, Ally-saurus; Torrey gives the girl a dinosaur T-shirt, fountainlike pigtails—and a pink, crayonlike tail and spikes, which reveal the depths of her obsession and imagination. At school, Ally discovers that her classmates’ interests are just as prominent: a group of ‘princesses’ (whose yellow gowns and crowns are overlaid atop their school-day outfits) are initially unfriendly, while Ally finds like-minded friends in students who love spaceships, lions, and dragons. The children’s make-believe accouterments create a fun visual effect, delivering bright pops of color against Torrey’s b&w pencil drawings while simultaneously demonstrating the way children’s passions loom large in their lives.” —Publishers Weekly (STARRED)

“Ally is an ebullient heroine, and her enthusiasm is infectious. Torrey’s true-to-life story is matched by his pencil, watercolor, and digital media that catch all the fun (e.g., crayon marks denote Ally’s make-believe dino spikes). The oversize format and right-on message make this a good story hour choice.” —Booklist
-

Richard Torrey is an author, artist, and editorial cartoonist. He has written and illustrated seven books, including the popular Beans Baker series for Random House and the three-book series Almost, Why?, and Because for HarperCollins. He has also illustrated dozens of books for Simon & Schuster, Golden Books, McGraw-Hill, and Scholastic; had his art published in Highlights magazine, KidCity, and Inside Sports; and created a successful line of greeting cards for Recycled Paper Greetings. Richard lives with his wife and children in Shoreham, NY. You can learn more about Richard at: richardtorreystudios.com.