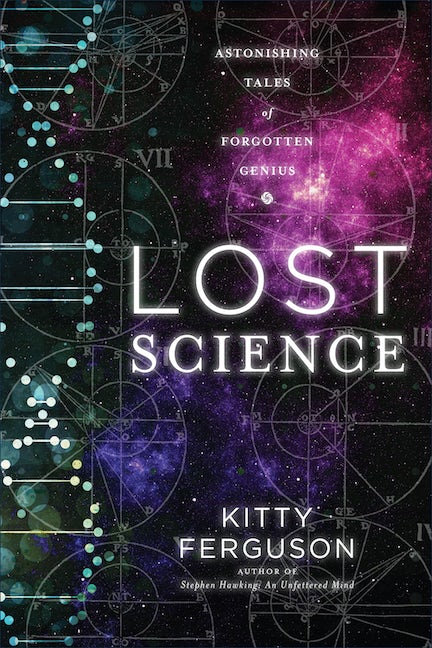 Following the successful Lost to Time comes this fascinating companion volume on lost science stories from bestselling author Kitty Ferguson.
Acclaimed popular science writer Kitty Ferguson investigates little-explored byroads in the history of science, from Johannes Kepler’s nearly disastrous venture into the realm of science fiction to a mid-twentieth-century experiment involving EEGs and rocket fuel. She introduces such underappreciated geniuses as Mary the Jewess, the first-century ancestress of modern chemistry; and Lise Meitner, who escaped Nazi Germany only to have her role in the discovery of nuclear fission ignored by the Nobel committee. Ferguson also takes us on astounding adventures with the likes of Jesuit astronomer Ferdinand Verbiest, who invented the first automobile as a clever toy to amuse the Chinese emperor in seventeenth-century Beijing and then saved his own life by winning a bizarre astronomy competition in against his former torturer.

Kitty Ferguson has been writing and lecturing about science and scientists for over two decades. Kitty is the author of eight books; her 1991 biography Stephen Hawking: Quest for the Theory of Everything (Random House) was written with Hawking’s encouragement and help and was an international bestseller. She also was a consultant for Hawking’s book The Universe in a Nutshell (Random House). Her most recent biography, Stephen Hawking His Life and Work/An Unfettered Mind (St. Martin’s Press), has been translated into 30 languages. Kitty has been interviewed by Forbes magazine, PBS’s Fresh Air with Terry Gross, the News Hour with Jim Lehrer, and the BBC. She lectures widely in North America and Europe, and her appearances have included the Goddard Space Flight Center, the Hayden Planetarium in NYC, the Nobel Peace Prize Forum, and many universities. Kitty and her husband divide their time between Cambridge, England, and South Carolina.