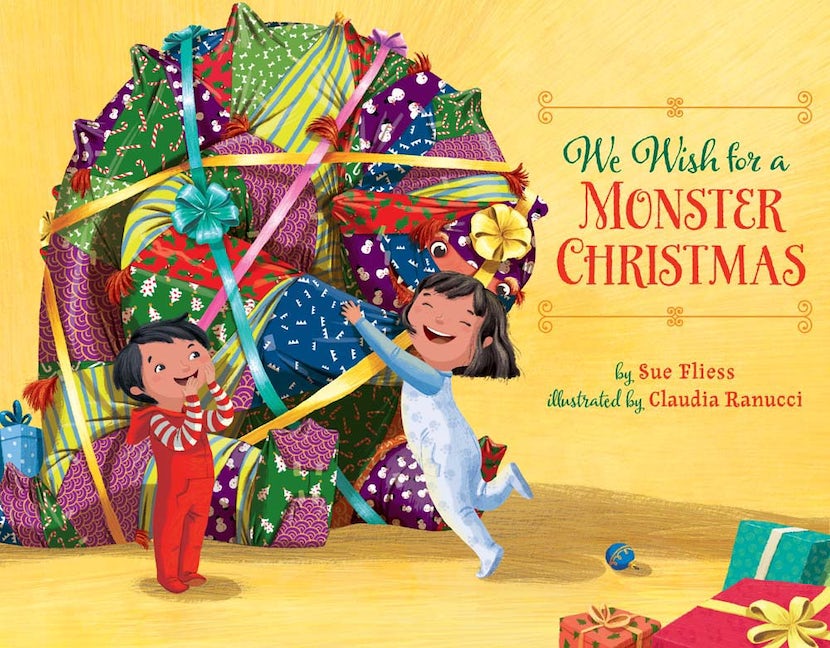 We Wish for a Monster Christmas

We Wish for a Monster Christmas

We wish for a furry monster,
A big, hairy, scary monster,
Our own stomping, chomping monster, for Christmas this year!

Dear Santa: please bring us a MONSTER for Christmas! This hilarious parody of the traditional carol stars two siblings who want something just a little more special than the usual toys for their Christmas gift. Mom and Dad refuse—so they appeal to a higher power: Santa. And since they’ve been good all year, he delivers. But having a monster in the house may not be all it's cracked up to be . . . as the kids discover when he turns their playroom to rubble and causes tons of trouble. Now, what will they do? Delighted readers will sing along with the merry song.

“The holidays don’t need much help to get chaotic, but one family is really in for it after two siblings ask Santa for a monster for Christmas. Reworking the lyrics of ‘We Wish You a Merry Christmas’ with style (and lots of household destruction), Fliess contrasts the children’s joy about their new friend/pet with their parents’ less-than-thrilled reactions (‘Our mom took up meditation./ Our dad hollered in frustration./ But we had a celebration/ with monsterly cheer!’). In lively digital illustrations, Ranucci pictures the monster as an overgrown beast with lustrous red-orange fur, a spiky tail, and evident affection for the children, even as he inadvertently turns the house upside-down with his mess making. . . . the anarchic closing scene will leave kids laughing.” —Publishers Weekly

“This narrative poem is intended to be sung to the tune of ‘We Wish You a Merry Christmas,’ and it easily fits the familiar melody. Opening endpapers show various monsters as advertised in a catalog, with the one called Furzilla circled and accompanied by the words ‘This one! Love it!’ A girl and her younger brother dream of all the fun they could have with their very own monster. When the suggestion is met with refusal from Dad, the siblings visit Santa, who assures them that since they’ve been good all year, it will be delivered. The promise is fulfilled, but of course, the monster wreaks havoc. The solution: put him outside. Furzilla adapts well to the backyard and even helps with some of the more arduous chores. Best of all, the kids still get to have fun with him. But that’s no reason to not start thinking of what they want next Christmas—closing endpapers give a glimpse of the future possibilities. VERDICT A fun departure from elves for those who prefer monsters and monkeys. A good purchase for large collections.” —School Library Journal

Sue Fliess (pronounced “fleece”) has published more than 20 children’s books—11 of them in the last two years (Shoes for Me!, A Dress for Me!, and Let’s Build: all Amazon titles; Tons of Trucks, published by Houghton Mifflin Harcourt; Robots, Robots, Everywhere!, How To Be A Pirate, How to Be A Superhero, and The Hug Book: all Little Golden Books; and A Gluten-Free Birthday for Me!, published by Albert Whitman & Co.) and has 10 more books under contract. Her picture books have been used as curriculum tools in schools and in museum educational programs.

Her background is in copywriting, PR, and marketing, and her articles have appeared in O! (the Oprah Magazine), Huffington Post, Writer's Digest, Education.com, and more. She is thrilled that her OprahMagazine article was chosen for inclusion in O's Little Books of Happiness, which published in March 2015. Sue is available for author visits, speaking engagements, and interviews. Learn more about Sue at suefliess.com and follow her on Twitter at @SueFliess. She lives in northern Virginia.


Claudia Ranucci was born in Rome, but now lives in Spain. She runs a small Spanish publishing house in Madrid, and is also a designer and illustrator. Her illustration work has been published in France, Portugal, China, Japan, Korea, Mexico, and Brazil.

We Wish for a Monster Christmas Official Book Trailer