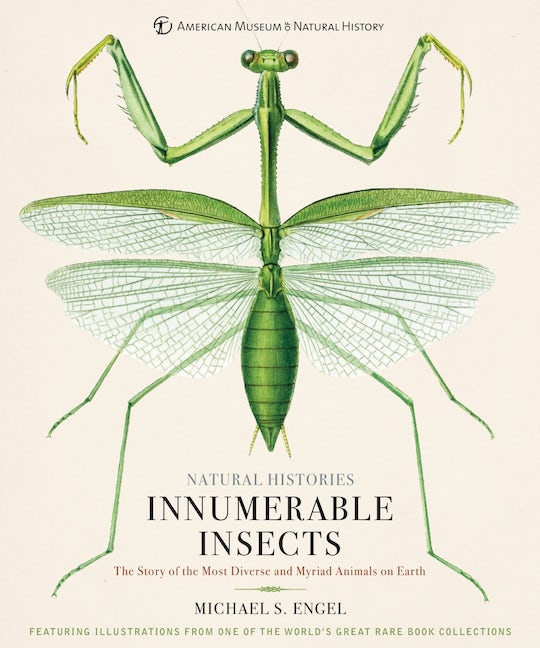 The Story of the Most Diverse and Myriad Animals on Earth

The Story of the Most Diverse and Myriad Animals on Earth

The images . . . are the stars of this work, which will delight every entomophile who turns its pages.” — Publishers Weekly

A fascinating look at the world’s most numerous inhabitants, illustrated with stunning images from the American Museum of Natural History’s Rare Book Collection.

To date, we have discovered and described or named around 1.1 million insect species, and thousands of new species are added to the ranks every year. It is estimated that there are around five million insect species on Earth, making them the most diverse lineage of all life by far. This magnificent volume from the American Museum of Natural History tells their incredible story. Noted entomologist Michael S. Engel explores insects’ evolution and diversity; metamorphosis; pests, parasites, and plagues; society and language; camouflage; and pollination—as well as tales of discovery by intrepid entomologists. More than 180 illustrations from the Rare Book Collection at the Museum’s Research Library reveal the extraordinary world of insects down to their tiniest, most astonishing details, from butterflies’ iridescent wings to beetles’ vibrant colors.

“Engel, a University of Kansas biology professor, delves into the American Museum of Natural History’s rare book collection, specifically its ‘thousands of marvelously illustrated books’ about insects, to create a book as aesthetically pleasing as it is informative. Insects, Engel explains, are indeed innumerable, with perhaps as many as 30 million extant species. They can also be set apart from the rest of the planet’s life in many respects, since ‘insects were among the earliest animals to transition to land, the first to fly, the first to sing, the first to disguise themselves with camouflage, the first to evolve societies, the first to develop agriculture, and the first to use an abstract language.’ Engel covers insect diversity, evolution, ecology, and physiology, among other topics, while including intriguing vignettes about early entomologists, including Maria Sibylla Merian, Julius T.C. Ratzeburg, and Jan Swammerdam. With so much ground to cover, Engel doesn’t go into great detail about any one point, but there’s enough substance to satisfy most readers. The images, however, are the stars of this work, which will delight every entomophile who turns its pages.” — Publishers Weekly
-

Michael S. Engel is a Research Affiliate at the American Museum of Natural History in New York. He is also University Distinguished Professor of Ecology and Evolutionary Biology and Senior Curator of Entomology at the University of Kansas in Lawrence. Dr. Engel is the coauthor of Evolution of the Insects, and author of numerous entomological treatises. He has been to 40 countries, north of the Arctic Circle and down to the equator in tropical rain forests, in search of living insects and ancient fossils. He lives in Lawrence, KS.

The American Museum of Natural History is one of the world’s preeminent scientific, educational, and cultural institutions. Since its founding in 1869, the Museum has pursued its mission—to discover, interpret, and share information about human cultures, the natural world, and the universe—through a broad program of scientific research, education, and exhibition.
Each year, millions of visitors experience the Museum’s 45 permanent exhibition halls, including the Rose Center for Earth and Space and the Hayden Planetarium. The Museum’s scientific collections contain more than 34 million specimens and artifacts, which are an invaluable resource for Museum scientists, for students in the Museum’s Richard Gilder Graduate School, and for researchers around the world. Visit ‪amnh.org for more information.