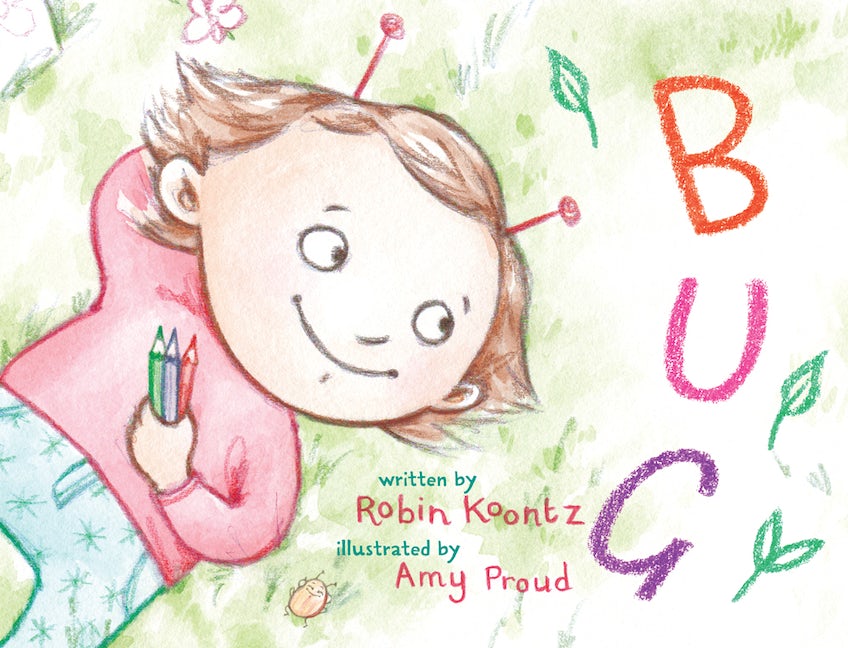 When a bug-crazy girl needs to ace a big math test, she finds a clever way to solve her problems, 100%.

Bug is the nickname-that-stuck for a quirky little girl who‘s mad about insects and drawing . . . and hates arithmetic. But when her teacher promises the class they can go on a field trip to the science museum only if everyone does well on their math test, Bug knows she HAS to pass. This humorous, character-driven story shows kids who struggle with math (or any subject) that there are many ways to find the correct answer—if you use your imagination and count on the things you love.

“A girl discovers that her passions can help her make sense of a difficult skill. Bug is a girl who loves drawing bugs more than anything else, ‘especially math.’ When her teacher, Mrs. Muskie, announces that they will go to the science museum, which has a cool bug room, if the class performs well on the upcoming math test, Bug takes the challenge seriously. She goes to a field to study but, frustratingly, finds herself continually distracted by new bugs to draw. After several failed attempts, she realizes that her doodles hold the visual key to understanding the math problems: adding spots on a butterfly's wings and subtracting the number of ants that drop their seeds. Notably, Koontz acknowledges her young character's agency by having Bug independently come to this revelation and later calmly assist Mrs. Muskie when Bug's ‘lucky crickets’ (stashed in her lunchbox to help with the test) get in her hair. The latter moment offers a spot of fun for Bug's multiracial classmates. Pale-skinned Bug is precocious with her short, light-brown hair, rolled-up pants, and antenna headband; Mrs. Muskie has brown skin and a ‘cloud of curly hair.’ Proud's illustrations in pencil and acrylic take on the style of doodles themselves, with pronounced, colored outlines and circular eyes for characters and bugs alike. The crawling critters appear charming instead of off-putting. A respectful boost of encouragement for young minds that may be struggling with school.” —Kirkus

“A little girl is called Bug for her love of insects. She’d rather draw bugs than do anything else, especially learn math. She doodles bugs during class and on her math homework. When her teacher promises the class a trip to the science museum (Bug-o-Rama exhibit!) if everyone does well on the next math test, Bug knows she must study hard, but bug-drawing proves too tempting. Laying on the grass doodling bugs, she has a light bulb moment—her bug pictures could be used to do addition and subtraction. ‘The butterfly had 3 spots on each wing. Bug counted 6 spots.... That’s math. I’m doing math!’ Suddenly math isn’t so hard. Bug easily passes the big test, despite the escaped crickets she brought for luck causing a commotion when they jump in her teacher’s hair. Koontz’s plentiful text is complemented by Proud’s sketchlike illustrations. Relying on white space, an eye for detail, and muted colors, she easily captures Bug’s fascination with insects and her difficulty focusing on math. Math is easy when you combine it with your passion, and this is a story to help dissipate a math block. ­VERDICT An enticing choice for one-on-one and small group sharing.” —School Library Journal
-

Robin Koontz is the author and illustrator of numerous picture books and early readers; she has also written several titles for The Boxcar Children Mysteries series and scores of nonfiction books for educational publishers. Robin lives in Noti, OR, with her husband and pets. Visit her online at wordpress.robinkoontz.com.