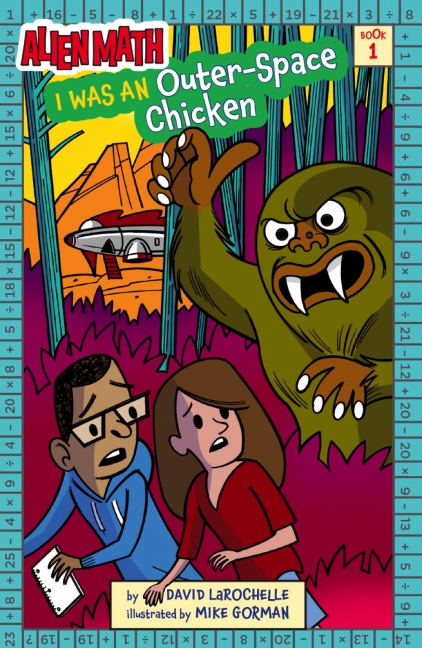 Math meets sci-fi in this clever chapter book about two numbers-loving friends and their alien adventures. The first in a new series!

Best friends Lamar and Lexie love math—and, in this first book in the Alien Math series, their skills come in handy when they're abducted by an extraterrestrial named Fooz. Fooz, unfamiliar with Earth life, mistakes the children for chickens . . . until Lamar and Lexie prove they're human by solving a tricky math problem. Fooz agrees to take them home, but on a side trip to a nearby planet to refuel, the two are captured by lumfurs, creatures that resemble Bigfoot. In order to escape and return to Fooz's ship and subsequently Earth, Lamar and Lexie must solve problems that require finding patterns, making estimates, and deciphering codes. Can the children pass the test and get home again?

“Lexie and Lamar are practicing for their math tournament when they are abducted by a creature from another planet. Fooz thinks that Lexie and Lamar are chickens, since that's what they called each other just before she abducted them. Since chickens have ‘extremely low’ intelligence, Fooz conducts a discreet intelligence test involving problem-solving and math to determine whether they are in fact not chickens. Solving problems under time pressure livens things up for Lexie and Lamar, who love to use numbers, as well as for readers. But proving their humanity is no help when they are kidnapped. Again and again, math, logic, and numbers get Lexie and Lamar out of stick y situations. Narrator Lexie never misses an opportunity to use numbers in storytelling (‘three-inch trickles of sweat were dripping down my back’), making for a well-executed, funny . . . voice. Readers are subtly given opportunities to solve problems while reading. Full-page drawings and smaller spot illustrations break up the text in each chapter, depicting Lamar with brown skin and Lexie as white . . . The math will be enough to draw some readers in while the action-packed story will keep the math-averse reading—and perhaps occasionally flexing their math muscles too. Book 2, Planet of the Penguins, publishes simultaneously. This playful math series is overall a valuable addition to the chapter-book shelf.” —Kirkus

“Though an extraterrestrial caper seems like an incongruous pairing with down-to-earth mathematical challenges, LaRochelle (Isle of You) cannily fuses the two in this sprightly series launch. Best friends and cocaptains of their school’s Math All-Stars team, Lamar and Lexie are riding in their apartment building’s elevator when they are abruptly transported to the spaceship of a furry purple creature, who is on a mission to collect ‘strange and unusual species’ for her planet’s zoo. When Fooz humorously mistakes the kids for unintelligent chickens (which are on the zoo’s wish list), they solve a math problem to prove her wrong. The alien then agrees to return the kids to Earth, but meanwhile, the friends get lost exploring the fantastical planet and again employ their math smarts to navigate their way back to Fooz’s spaceship. LaRochelle shrewdly integrates the numerical puzzles (which involve patterns, probability, measuring systems, and symmetry) into his madcap plot, and the playful competition between the math whiz kids further energizes the story. In a concluding section, Lamar explains the mathematical solutions, offers alternate ways to reach the same conclusion, and outlines additional numerical conundrums to crack.” —Publishers Weekly
-

A former elementary math teacher, David LaRochelle has won numerous awards for his children’s books, including the Sid Fleischman Humor Award, the SCBWI Golden Kite Honor Award, and the Minnesota Book Award. His previous books for Sterling were This Is NOT a Cat,1+1=5 and Other Unlikely Additions, and Arlo's ARTrageous Adventure, which he both wrote and illustrated. He lives in White Bear Lake, MN. Find out more about David at davidlarochelle.com.

Mike Gorman is an illustrator, graphic designer, web developer, and tattoo artist. He lives in Westbrook, ME. 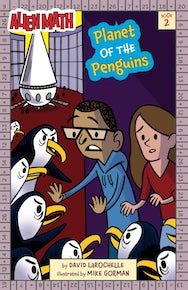 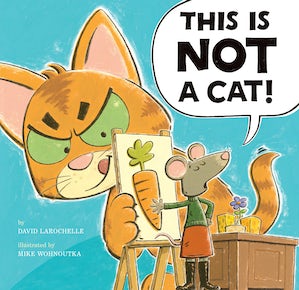 This Is NOT a Cat!