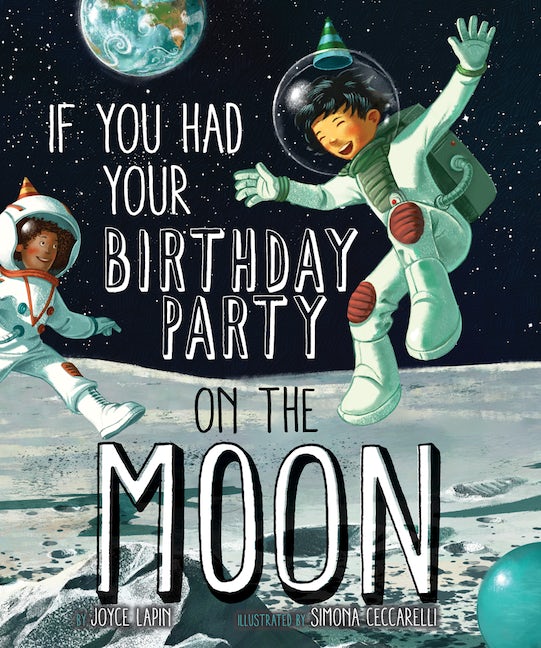 If you had your birthday party on the moon, what would it be like? Blast off to an extraterrestrial celebration and find out! This cool picture book combines fun and facts to help kids learn all about outer space.

Have your birthday party on the moon and everyone will come! After all, who wouldn’t want to ride in a rocket and celebrate for a day that lasts as long as a month on Earth? Then, young partygoers could romp in a low-gravity playground; watch candles and balloons behave weirdly in the Moon’s atmosphere; and see why the “moon angels” they make in the thick carpet of lunar dust will last for thousands of years. With each discovery, kids learn the science behind the surprise, explained in terms they’ll understand. Complete with sidebars and a glossary, this entertaining adventure is perfect for sharing at home and at school.

“Why celebrate for just 24 hours on Earth when our nearest neighbor has a 709-hour day? Sure, balloons won't float and the near lack of atmosphere also means that everyone has to wear special suits—but the low gravity makes gymnastics a snap, it's easy to catch the candy as it falls from the piñata, and a batted baseball really travels! Expanding on the fanciful bits with boxed blocks of factual commentary, Lapin accurately describes lunar conditions—explaining, for instance, why the sky is black rather than blue and noting that earthshine is 40 times brighter than moonglow—while suggesting expeditions to check out craters and maria, having a scavenger hunt to track down artifacts left by the Apollo astronauts (two golf balls, 12 pairs of space boots, a rumored ‘rude drawing’), and chowing down on ‘a Space Station favorite,’ chocolate-pudding cake squeezed from a foil pouch. Ceccarelli adds jolly notes aplenty with painted scenes of young partiers (an inclusive lot, featuring one with Asian features and several people of color) zinging exuberantly around in zero gravity, cavorting or making dust angels on the lunar surface, and gathering back at their spacecraft as a pizza-delivery rocket lands nearby before they all blast off for home. The author reserves generous slices of print and web resources at the end for readers who couldn't make the voyage. A prime candidate for a destination party.” —Kirkus

“Lapin imagines the playful scenario of a birthday party held on the surface of the moon. After riding to the moon in a shiny orange rocket, the birthday party attendees—including one dog—make their landing. Space suits (and party hats) on, the partiers gaze in awe at the view of Earth. Lapin writes engagingly, incorporating factual details about the moon and galaxy while the fantastical circumstances unfold: ‘And now for the very best part of your Moon party: bouncing and gliding along the Moon’s surface, in gravity that’s only one-sixth of Earth’s.’ Ceccarelli captures the children’s sense of wonder in the images while presenting a degree of naturalism in the moon landscape and depiction of Earth from a distance. Readers with approaching birthdays may be inspired to replicate this moon-themed celebration.” —Publishers Weekly
-

Joyce Lapin is very active in SCBWI. This is her first book for young readers. She lives with her family in Simsbury, CT.

Simona Ceccarelli is a freelance illustrator who has worked as both a scientist and an art director. Originally from Como, Italy, she’s now based in Basel, Switzerland.

If You Had Your Birthday Party On The Moon Book Trailer

The Little Spacecraft That Could