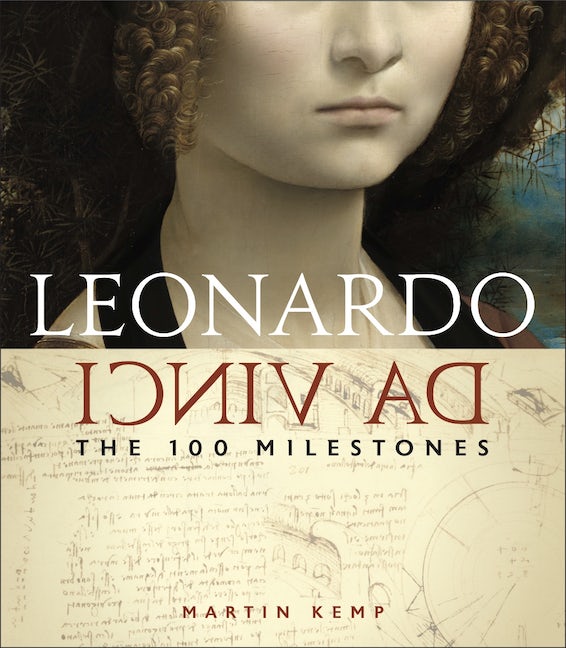 Leonardo da Vinci was born in the small Tuscan town of Vinci in April 1452. Over the centuries, he has become one of the most famous people in the history of visual culture. Spring 2019 marks the 500th anniversary of his death in May 1519, with exhibitions and events planned across Europe and the United States. This lavishly illustrated volume by Martin Kemp—one of the world’s leading authorities on da Vinci—offers a fresh way of looking at the master’s work. Kemp focuses on 100 key, broadly chronological milestones that cover an extraordinary range of topic across Leonardo’s many fields of discipline: painting, where he brought new levels of formal and emotional grandeur to his works, including The Last Supper and Portrait of Lisa del Giocondo (the “Mona Lisa”); anatomical studies, which are extraordinary for their sense of form and function (Studies of the Optics of the Human Eye and Ventricles of the Brain); engineering marvels, noted for their range and extraordinary visual quality (Gearing for a Clockwork Mechanism and Wheels without Axles and Designs for a Flying Machine); and his progressive engagement with a range of sciences—anatomy, optics, dynamics, statics, geology, and mathematics.

“Kemp sheds fascinating light on Leonardo’s scientific, specifically anatomical sketches. The fine-lined, painstakingly intricate ‘Studies of the Fetus in the Womb and of the Placenta’ and ‘Demonstration of the Irrigation Systems of a Female Body,’ for instance, showcase a ‘wholly novel ... diagrammatic technique,’ not to mention the left-handed da Vinci’s idiosyncratic mirrored writing style: He wrote right to left. They also betray that this pre-eminent student of exteriors and man-made inventions also harbored a profound — and at the time quite avant-garde — obsession with human interiority. Given that his name will forever be synonymous with the ‘Mona Lisa’ — ‘considered by many to be the world’s most famous picture,’ says Kemp — it’s worth noting that Leonardo’s prolific, nearly five-decade oeuvre included only 20 paintings at most.” —The New York Times -

Martin Kemp, Emeritus Research Professor in the History of Art at Oxford University, is one of the world’s leading experts on Leonardo da Vinci. His books include the acclaimed biography Leonardoda Vinci: The Marvellous Works of Nature (Oxford University Press) and Mona Lisa: The People and the Painting (OUP, cowritten with Giuseppe Pallanti). His most recent work is Living with Leonardo: Fifty Years of Sanity and Insanity in the Art World and Beyond (Thames & Hudson), and he has written for Nature for more than 10 years. He’s curated a series of exhibitions on Leonardo and other themes, including the London shows Spectacular Bodies at the Hayward Gallery; Leonardo da Vinci: Experience, Experiment, Design at the Victoria and Albert Museum; and Seduced: Sex and Art from Antiquity to Now at the Barbican. He was also guest curator for Circa 1492 at the National Gallery of Art in Washington in 1992. Kemp is currently working on a new edition of Leonardo’s Codex Leicester, his most important scientific manuscript, purchased by Bill Gates in 1994. Kemp lives in Oxford, UK.

Pages: 224 pages, all in color, with one gatefold