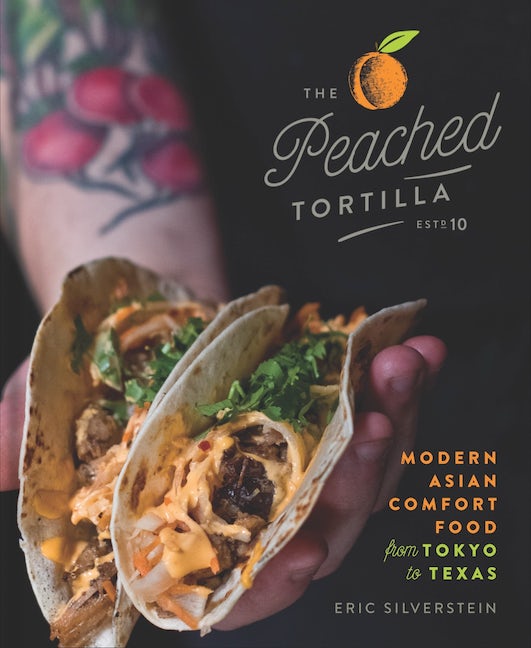 Eric Silverstein, whose restaurant, The Peached Tortilla, was singled out by TheNew York Times as “One of the Five Places to Go in Austin,” shares 100 recipes for delicious Asian street food . . . with a modern Southern and Southwestern twist!

“This is a solid debut from an eclectic chef.”—Publisher’s Weekly

“[The] refreshingly gracious tone, the creative recipes, and the personal introductions combine to make this an outstanding book.” —Foreword Reviews

Eric Silverstein’s background in Asian food culture as a child in Japan, and, later, his immersion in Southern and Southwestern cuisine, informs his cooking at his restaurant, The Peached Tortilla, in Austin, Texas. The 100 flavor-packed recipes here include many of The Peached Tortilla’s most-beloved dishes, like the Banh Mi Taco, JapaJam Burger, and Bacon Jam Fries, which gained rabid fandom when Silverstein first served them out of his famed Austin-based food truck. Other crowd-pleasing favorites range from crispy Umami Fried Chicken and Korean Short Rib Pappardelle with Smoked Crème Fraîche to Asian Pear Miso Salad and Roasted Cauliflower with Nori Brown Butter. This is Asian fusion at its best, delivering soul-satisfying comfort food with a kick!

“Silverstein, born in Tokyo and raised in Atlanta, operated food trucks in Austin before opening The Peached Tortilla in 2014, and here he offers 100 tantalizing recipes that combine the flavors of the American South with those of Asia. Southern staples with a savory twist include umami fried chicken, which is marinated in fish sauce and red wine vinegar then battered in rice flour, and kimchi queso, in which pureed spicy cabbage melds with melted Velveeta. Among a large array of street food–inspired dishes are Chinese BBQ pork tacos topped with an Asian slaw, and char kway teow, a Malaysian mix of shrimp and noodles in a tangy sauce. The chef’s affection for a certain cut of beef, meanwhile, is evident in kung pao brisket, BBQ brisket tacos, and brisket hash, among many others. There is an extensive chapter on pickles and sauces, which form the flavor foundation for many of the dishes, and a handy glossary that lists various noodles such as the flat Vietnamese banh pho and the Chinese ho fun, ideal for stir fries. This is a solid debut from an eclectic chef.” —Publishers Weekly

“It blends a food memoir with exciting recipes—unique takes on everything from gussied-up hot dogs and burgers to cross-cultural noodles, tacos, and cocktails. . . . Silverstein’s unusually well-described and illustrated Asian food glossary is a fantastic resource that will enable anyone to easily negotiate the aisles of their nearest (or online) Asian food market. . . . This refreshingly gracious tone, the creative recipes, and the personal introductions combine to make this an outstanding book.” —Foreword Reviews

“Part autobiography, part food odyssey and part cookbook, The Peached Tortilla: Modern Asian Comfort Food from Tokyo to Texas explores Eric Silverstein's journey through Asia as a child . . . and dives deeply into the passion for food that led him to create a multi-pronged food and hospitality business. . . . Silverstein crafts recipes that are heavily influenced by the many contrasting flavors of his favorite childhood foods. Including home-cooked meals, street food, noodle bowls and cocktails, The Peached Tortilla offers an idiosyncratic blend of soul food, incorporating Asian seasonings, Tex-Mex staples and Southern-fried comforts. A section table of contents, cooking notes on unfamiliar utensils and techniques and suggested Asian pantry staples lead into 100 recipes with accompanying full-color photographs and author's note vignettes. . . . A glossary of Asian foods and noodles, including pictures of brands for easy recognition in the grocery story, rounds out this introduction to one man's vision of Asian-Southern cooking with a Southwestern twist.” —Shelf Awareness

“This cookbook with a great background story and delicious sounding mashups, such as pad thai tacos and banana Nutella spring rolls, is recommended for extensive cookbook collections.” —Library Journal

“If banh mi tacos, Japanese street corn, and bacon-jam fries sound like just the comfort-food fusion to satisfy your cravings, look no further than this part-memoir, part-cookbook from Silverstein. The chef takes the reader on his food journey from his childhood in Japan to the founding of his first food truck through the opening of his restaurant, the Peached Tortilla, in Austin, Texas, where his fusion of Asian street food and Southern and Southwestern dishes has made him famous. The 100 recipes in the book are divided into categories of theme (for instance, Mom’s Chinese home cooking) and type (such as pickles and sauces). Silverstein also includes a useful glossary of food terms, a list of Asian noodles and Asian food staples to always have at the ready in the pantry, as well as his own cooking notes and tips. Readers might find that Silverstein's story and recipes are a satisfying stand-in for a trip to Austin.” —Booklist online
-

Born in Tokyo, Eric Silverstein became immersed in Japanese food culture as a child. When his family moved to Atlanta, GA, he fell in love with Southern cooking. Silverstein eventually pursued a career in the food-truck industry, and has since been featured in TheNew York Times, People, Kiplinger's, Food & Wine, and Details, as well as on Live! With Kelly & Michael, Food Network, and The Cooking Channel. Silverstein opened his first brick-and-mortar restaurant, The Peached Tortilla, in Austin, TX, in 2014 (named by TheNew York Times as “One of the Five Places to Go in Austin”). In 2016, Silverstein opened Peached Social House, a one-of-a-kind event and catering space, and in 2018, he opened The Peached Tortilla’s first fast-casual restaurant in Austin-Bergstrom International Airport.