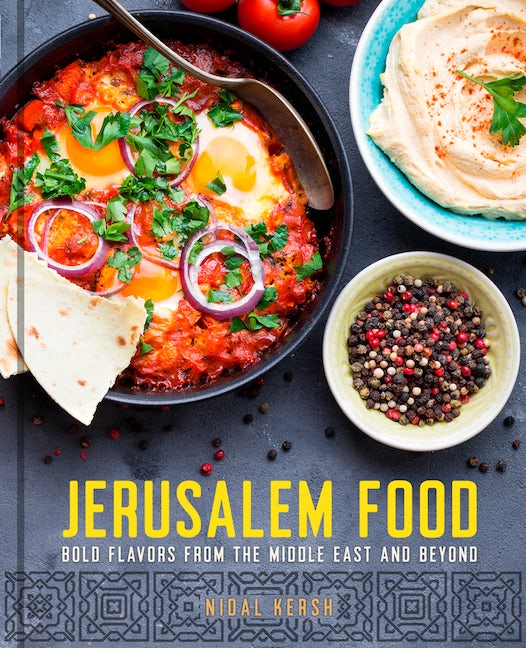 Bold Flavors from the Middle East and Beyond

Bold Flavors from the Middle East and Beyond

Winner of the Gourmand Award in the Arab category (US).

For centuries, Jerusalem has been a melting pot for a dizzying number of cultures, and its cuisine reflects that diversity. The city’s cooking has no boundaries . . . and neither does this cookbook. Here you’ll find a range of classic dishes, including fattoush, schnitzel, kebabs, hummus, falafel, mana'ish, shawarma, and baba ganouj. And of course there are simple but timeless pairings, like olives and Greek yogurt, with lots of za'atar and olive oil, plus a variety of delicious breads and savory vegetables, meats, and fish. In a warm conversational style, Nidal Kersh provides intriguing personal family background and an historical perspective that creates a rich context for understanding Jerusalem’s thriving food culture.

“ . . .  a handy roundup of quintessential Mediterranean and Middle Eastern dishes with a few eccentricities thrown in. Kersh, who introduced falafel to Stockholm with his restaurant Falafelbaren, was raised in Sweden and his paternal grandparents were Palestinian. He provides insight into the politics of food, including the Israeli-Palestinian debate over the origins of hummus, and shares recipes for classic hummus, as well as for a chunkier version called msbaha. A chapter entitled ‘Meat and Fish’ contains mainly chicken entrees and only two fish options, but there is a comforting lamb shawarma, as well as pan-fried lamb kebabs. As an alternative to a traditional falafel, Kersh serves up a Swedish version with yellow peas replacing chickpeas and wild garlic in lieu of coriander. The port city of Akko, Israel, where Kersh spent time in his youth, is the source of his Turkish salad, salata turki, as well as sayadieh—seabass and rice with a pinch of saffron. . . . the recipes themselves are certainly enticing.” —Publishers Weekly
-

Nidal Kersh was born in Sweden, and grew up in Stockholm, as well as in the ancient port town of Akko, not far from Jerusalem. He is now the owner of Falafelbaren, Stockholm’s first falafel restaurant. Jerusalem Food is his first book, and was published in Sweden before being translated and published by Sterling.