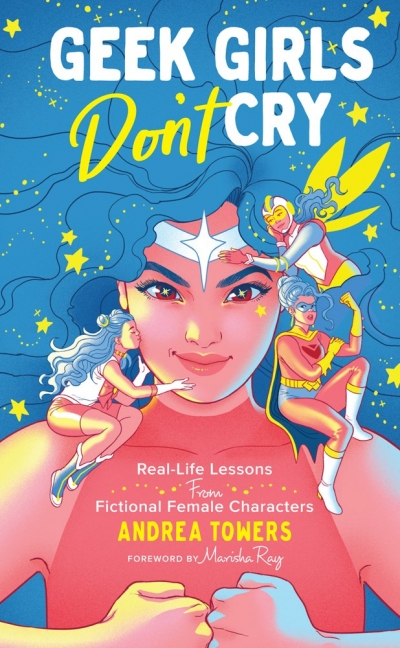 What does it mean for a woman to be strong—especially in a world where our conception of a “hero" is still so heavily influenced by male characters like Batman, Spider-Man, and Superman? Geek Girls Don't Cry explores the subject, offering advice tailor-made for fans of any age. Andrea Towers, who works in public relations at Marvel Entertainment and has written about superheroines for outlets such as Entertainment Weekly, outlines some of the primary traits heroic women can call upon, like resilience, self-acceptance, and bravery, pulling in stories from real-life women as well as figures from the pop-culture pantheon. She also interviews the creators of our favorite fictional heroines, who discuss how they drew from their own experiences to develop these protagonists and how, conversely, their own creations continue to inspire them.

“In a market flush with biographical anthologies of awesome, powerful, and sometimes unknown women, Towers' book stands out, and not just because the women she discusses do not technically exist. She puts the creative in creative nonfiction as she takes the biographical details of fictional female characters and associates them with various real-life issues to empower and comfort readers. She looks at pop culture favorites from books, TV shows, movies, and comic books (aka Geek Girls), from Hermione Granger to Buffy the Vampire Slayer to Xena, Warrior Princess to Black Widow, and how these women deal with topics like trauma, grief, depression, overcoming adversity, and isolation. Relating to a beloved icon can help readers deal with their struggle. Even if a reader is unfamiliar with one of the characters, they can still personalize and engage with Towers' interpretation of their story. The power of using Geek Girls' stories in this context does not discount the fun of discussing their stories, making this an enjoyable read for anyone interested in pop culture, with particular relevance to those working to overcome struggles.” —Booklist (Starred review)
-

A lifelong fan of pop culture and the individuals who make it, Andrea Towers has worked in the entertainment industry for more than 10 years—including in her current role at Marvel Entertainment. Her work has been published in outlets such as Entertainment Weekly, Paste Magazine, Mashable, Bustle, CVLUX, California Vibe, and Variety. She lives in New York City.