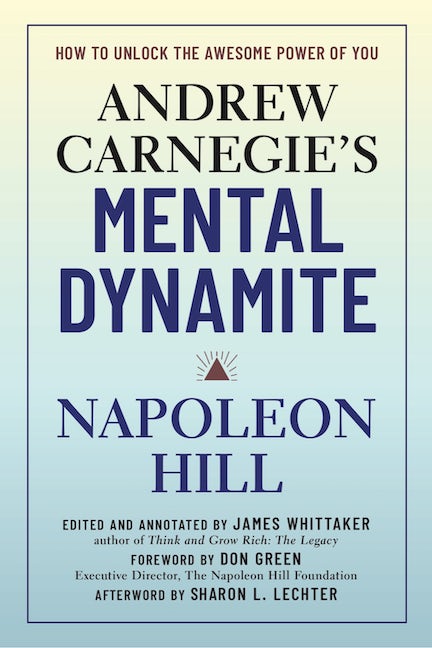 Based on a series of booklets written by bestselling motivational writer Napoleon Hill, Andrew Carnegie’s Mental Dynamite outlines the importance of three essential principles of success: self-discipline, learning from defeat, and the Golden Rule applied.

In 1908, Napoleon Hill met industrialist Andrew Carnegie for what he believed would be a short interview for an article. Instead, Carnegie spent hours detailing his principles of success to the young magazine reporter. He then challenged Hill to devote 20 years to collating a proven formula that would propel people of all backgrounds to happiness, harmony, and prosperity. Hill accepted the challenge, which he distilled in the perennial bestseller Think and Grow Rich.

Now, more than a century later, the Napoleon Hill Foundation is releasing this epic conversation to remind people that there are simple solutions to the problems troubling us most, everything from relationships and education to homelessness and even democracy. This is revealed in three major principles: self-discipline, which shows how the six departments of the mind may be organized and directed to any end; learning from defeat, which describes how defeat can be made to yield “the seed of an equivalent benefit” and how to turn it into a stepping-stone to greater achievement; and the Golden Rule applied for developing rewarding relationships, peace of mind, and a strengthened consciousness.

Each chapter draws on Carnegie’s words and advice as inspiration, with annotations by Napoleon Hill scholar James Whittaker explaining why they are essential for reaching your goals and prospering—for you, your family, and your community.

“Mental Dynamite takes us straight to the source in one of the most fascinating conversations ever. It is a riveting read and packed with actionable tips for people to transform their lives.”
– Janine Shepherd (bestselling author, keynote speaker and resilience expert)

“Mental Dynamite reminds us why visionaries like Carnegie and Hill were so impactful. It is an extraordinary book released at a time when the world needs it most.”
– Brandon T. Adams (Emmy® Award winning producer and host of Success in Your City)

"This book is a must read. James Whittaker goes straight to the fountainhead of success philosophy with Andrew Carnegie whose wisdom is even more relevant today. The impact of this book will be felt for generations to come.”
– Satish Verma (President/CEO of the Think and Grow Rich Institute)

“In every field of endeavor, there is a critical moment, intersection, or connection when the state-of-the-art takes a quantum leap. This happened in the field of personal development when Andrew Carnegie and Napoleon Hill got together. The world has never been the same, and you will not be the same once you experience Andrew Carnegie’s Mental Dynamite. Read and grow rich.”
– Jim Stovall (President of the Narrative Television Network)

“Motivational, inspirational, and highly actionable. Mental Dynamite is THE blueprint for massive success in business and life.”
– Dr Steve Sudell (Creator of The Neck Hammock™ and Co-founder of Stretch Lab)

“Many of us dream of being a fly on the wall for some of the most important conversations in history. Mental Dynamite gives us the rarest of opportunities, as we witness how two of the greats discuss and deconstruct high performance. It’s masterful. The nuances that are vital to getting traction in your life are extracted brilliantly by Napoleon Hill. In addition, James Whittaker brings it together beautifully, essentially turning a transcript into a powerful playbook for individual greatness. It truly proves that the outer chief is a reflection of the inner chief.”
– Greg Layton (Founder of Chief Maker)

“A lot has changed since the earliest conversations between Andrew Carnegie and Napoleon Hill in 1908. But even more hasn’t changed. Mental Dynamite comes as a beacon from the past, reminding us of timeless wisdom that is used by the most influential predecessors of Carnegie and Hill in the present, and should be your guide to a successful future.”
– Joshua Ellis (Editor-in-Chief of Success Magazine)

“The lessons that Hill and Carnegie share in this book will help anyone turn perceived failure to triumph. It is a must read for anyone who wants to achieve at the highest level.”
– David Meltzer (Co-founder of Sports 1 Marketing, bestselling author, and award-winning business coach)

“Mental Dynamite uncovers the depths of our own limitless potential by giving us the exact actions used by the legends of our time.”
– Ronsley S. Vaz (Founder / Chief Energy Officer of Amplify)

“Though we all face defining moments, only a small minority of us are shaped by them. This is a story that explains how visionaries became giants in their chosen field. There is so much to learn from their example. And if it worked for them, it can work for you too.”
– Dennis Kimbro (bestselling author of Think and Grow Rich: A Black Choice)

“James Whittaker is a forward-thinking leader with a wealth of experience across a whole range of different modalities. In Mental Dynamite, he draws on his diverse background to extract and highlight the most powerful skills and tactics from two of the greats in Carnegie and Hill. This book is for anyone who is looking for the next level in any area of their life.”
– Kerwin Rae (business strategist and high-performance expert)

“Mental Dynamite arrives at the perfect time, because it explodes with the lesson that our finest teachers are the failures that defy us to dig deeper than we ever have, to uncover treasures inside us we never knew we had. The best thing that ever happened to me was being rejected 11 times by eight NFL teams before making it with the Kansas City Chiefs, and going on to be the most accurate and prolific kicker in NFL History when I retired. Mental Dynamite helps us to NEVER GIVE UP (how I sign every autograph!) because Failure and Defeat are our finest mentors.”
– Nick Lowery, Kansas City Chiefs All-Time Leading Scorer and Hall of Fame.
- 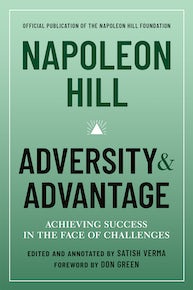 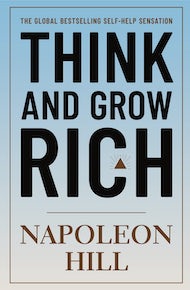