For fans of Napoleon Hill and his bestselling Think and Grow Rich: A new journal branded with the imprimatur of TheNapoleon Hill Foundation, which manages the famed self-help writer’s work.

Napoleon Hill's Think & Grow Rich has been a bestselling self-help phenomenon for more than 80 years. Now, the core philosophies told to Hill by Andrew Carnegie in Think & Grow Rich can be found in a guided, undated journal format. Annotated by James Whittaker, to both modernize and translate Hill's teachings for a contemporary audience, this journal will inspire and direct fans of Think & Grow Rich to follow Carnegie’s advice every day. Built around Carnegie’s core self-help principles, including defining one’s purpose, going the extra mile, indulging your imagination, and learning to profit from adversity, the Napoleon Hill Success Journal is for devoted fans of Andrew Carnegie and new converts to the Think & Grow Rich way of finding personal and professional success. 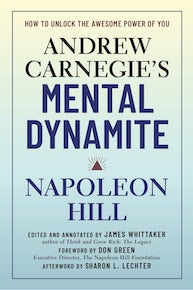