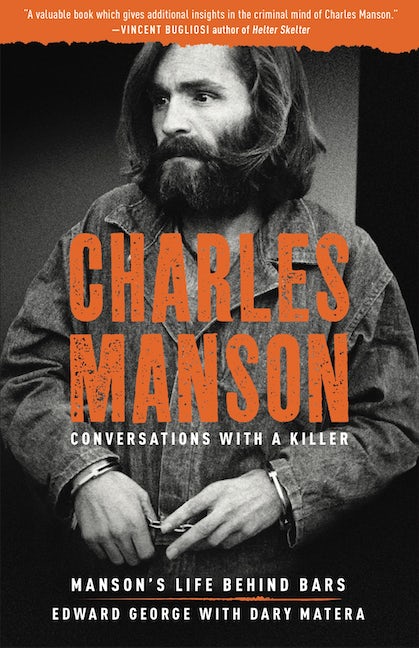 This is the gripping story of the real Charles Manson as told by his long-time prison administrator, counselor, unofficial "press agent," and confidant, Ed George.

“Throughout my life, people have asked me about Manson. . . .
‘Does he have hypnotic powers?’ ‘Does he have a diabolical charisma?’ . . .
‘Is he crazy?’ My response is that for some people, the answer to all of the above is yes—except for the last question.” —EDWARD GEORGE

Charles Manson was perhaps the most infamous criminal of the twentieth century. Convicted for orchestrating the shocking Tate-LaBianca murders in 1969, and for two other killings, there has been much written about him. But not many people knew him as well as Edward George, who over years of conversations with Manson as his prison administrator, counselor, unofficial “press agent,” and confidant, gained deep insight into Manson’s mind-set. In this updated edition of George’s riveting account, he illuminates the many sides of Manson: charismatic cult leader, master manipulator, calculated “showman,” sly trickster, and more. George and his coauthor, Dary Matera, begin by detailing the troubling events of Manson’s youth, the historic 1969 murders, and the subsequent trial that ended an era. They then pull back the curtain on the intense reality of Manson’s turbulent life behind bars and the events that have transpired since the initial publication of this book in 1999, including Manson’s death in 2017.

Praise for the original edition, Taming the Beast:

“A valuable book which gives additional insights into the criminal mind of Charles Manson.”—Vincent Bugliosi, author of Helter Skelter

“Charles Manson may be the most written about, commercially viable malefactor in American history, yet George and Matera offer a worthwhile new take on him in their jailhouse bio. . . . George came to know Manson’s whole rollicking gang in scary and intimate detail. He strives to understand Manson and his devotees and, spewing psychological and spiritual insights and plenty of witchy Masonoid details, succeeds in horrifying his readers.”—Booklist

“What distinguishes George’s book is that it puts a human face on a man whose very name defines evil-revealing the personality hidden during television interviews.”—Alameda Journal

“An ugly, ugly look at a man whose entire life has been a study in sickness. . . . Provide[s] a chilling glimpse of Family members like Lynette ‘Squeaky’ Fromme, who showed up at the prison regularly in her red cape.”—Kirkus Reviews

“This anecdotal account by his jailer confirms that Manson remains without remorse, unstable, frightening, and unlikely to ever be paroled. . . . George seems to have been truly shaken by his dealings with Manson.”—Library Journal

“Who was Manson?, George wondered. After all, who could be so cold, so much without soul? Figuring out Manson became almost an obsession for George. . . . At one point, he began meeting daily with Manson in his cell to try to understand this demon, or at least, what he first believed was a man with an indefensible demonic bent.”—Portland Maine Sunday Telegram -

Edward George worked for the California Department of Corrections as a counselor and ward supervisor for nearly 20 years. He oversaw Charlie Manson’s detention at both San Quentin and the California Medical Facility. Dary Matera is the author of 14 books, including Are You Lonesome Tonight? and John Dillinger: America’s First Celebrity Criminal.