The 1980s were a time of notorious serial killers—Jeffrey Dahmer, Aileen Wuornos, Samuel Little—and these are the deadliest of all. Uncover the facts about their crimes, along with the advances in forensics that helped lead to their capture.

The 1980s were the apex of a time that is sometimes known as the "Golden Age of the Serial Killer." These murderers and their nicknames—The Night Stalker, The BTK (i.e., "bind, torture, kill") Killer, The Butcher Baker, The Golden State Killer—became part of the era's zeitgeist. This fifth book in the Profiles in Crime series features the most notable murderers of the decade. Some are infamous, including Jeffrey Dahmer, the Cannibal Killer who consumed his victims’ remains, and Aileen Wuornos, whose seven confirmed murders in a single year helped establish the presence of women in the annals of serial killers. Others, less well known but equally deadly, include Dorothea Puente, who ran a care home in Sacramento and preyed on the elderly, and Robert Christian Hansen, who over more than a decade killed at least 17 women around Anchorage, Alaska.

Jane Fritsch is a journalist who was a reporter and editor at The New York Times, where she was a finalist for the Pulitzer Prize. She was also a reporter for The Los Angeles Times, Newsday, and the Chicago Tribune, where she covered the trial of the serial killer John Wayne Gacy. She was an assistant professor at The Greenlee School of Journalism and Communication at Iowa State University. 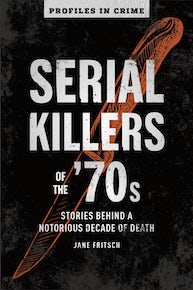