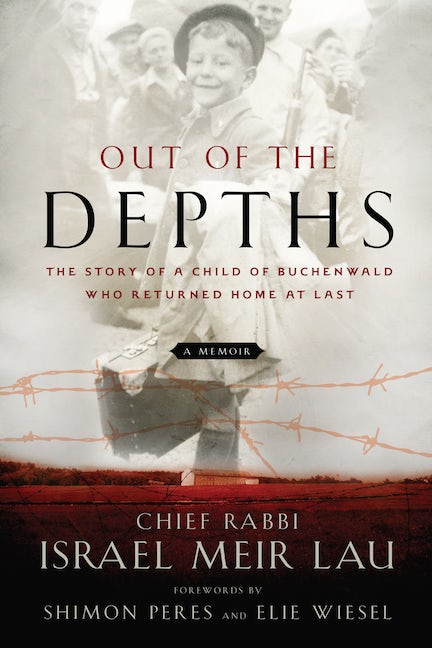 Out of the Depths

Out of the Depths

“The maws of the Nazi machine fed on children. That Lulek escaped is remarkable in itself. But that, instead of stunting him, his tragic experiences spurred him on to become a sage and a leader is a tribute not only to his own qualities but to the exceptional people with whom his life was bound up. This book is many things: survivor story, autobiography, wisdom literature and an unabashed love letter to Israel, the home to which its subtitle alludes.”—Montreal Gazette

“The Chief Rabbi of Israel recounts a harrowing journey from child prisoner in Buchenwald to champion of Holocaust survivors. . . . [An] uplifting story of peace, reconciliation and an incredible life’s journey.”—Kirkus

“In 3,000 years of Jewish literature in all its scope and variety, we have had very few rabbinic autobiographies. . . . Why then, did some rabbis write their own biographies? Perhaps because their lives were tumultuous and adventurous . . . but primarily because they felt that others might learn some important lessons from their lives. . . . Out of the Depths contains both these elements: an eventful and rich life and a unique perspective on its purpose and meaning.”—Jewish Home

“Thanks to his mother’s quick thinking (she sized up the situation as soon as she saw the Nazis sort the cattle cars by men, and women and children to different cars) she grabbed her seven-year-old son’s back with both hands and shoved him in the direction of the men. . . . The story of how Napthali [Lau’s brother] fought to stay near his little brother until the end of the war, and how the brothers finally reached Israel after Buchenwald was liberated in 1945, is a rich, beautifully told story.”—Jewish Book Council

“[Rabbi Lau’s] tale of triumph and faith as a young boy during the Holocaust provides us with a model of personal greatness in the face of unimaginable hardship. . . . Out of the Depths tells the story of his miraculous journey from an orphaned refugee to become one of the leaders of the Jewish people.”—Aish.com

“In this riveting and emotionally charged memoir, the former Chief Ashkenazi Rabbi of Israel relates the turbulent yet hopeful story of his life with unfailing honesty. . . . Rabbi Lau chronicles his life journey with ample detail to form vivid pictures and convey deep emotions. . . . The Holocaust comes alive with all its horrors, but so do the sparks of hope that emanate from his story.”—Orthodox Union