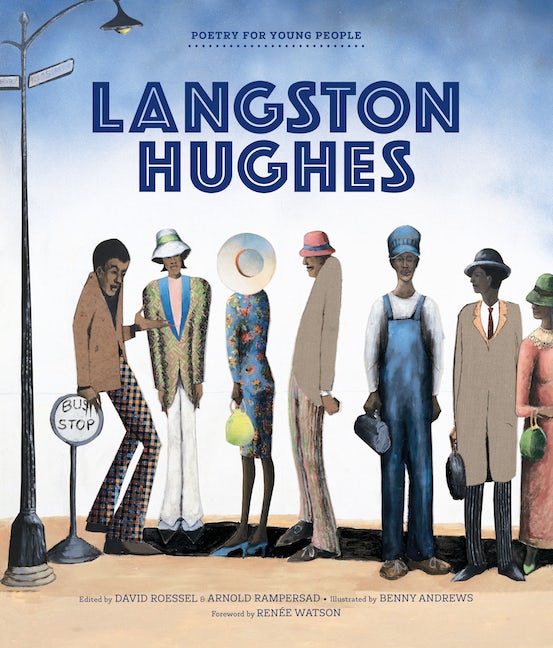 A Coretta Scott King Honor Award recipient, Poetry for Young People: Langston Hughes includes 26 of the poet’s most influential pieces, including: “Mother to Son”; “My People”; “Words Like Freedom”; “I, Too”; and “The Negro Speaks of Rivers”—Hughes’s first published piece, which was originally released in June 1921. This collection is curated and annotated by Arnold Rampersad and David Roessel, two leading poetry experts. It also features gallery-quality art by Benny Andrews and a new foreword by Renée Watson, a Newbery Honor Award recipient and founder of the I, Too Arts Collective.

Arnold Rampersad is the author of the widely acclaimed two-volume biography The Life of Langston Hughes, as well as Days of Grace: A Memoir, coauthored with Arthur Ashe, and Jackie Robinson: A Biography. He has also edited several books, among them The Collected Poems of Langston Hughes (with David Roessel). He is professor of English and senior associate dean at Stanford University, an elected member of the American Academy of Arts and Sciences and of the American Philosophical Society, and a recipient of a MacArthur Foundation ellowship.

David Roessel is the editor or coeditor of several books on American poetry and drama, including The Collected Poems of Langston Hughes (with Arnold Rampersad), and Poems/Hughes. He is also the author of In Byron's Shadow: Modern Greece in the English and American Imagination, winner of the Modern Language Association Prize for Independent Scholars.

Renée Watson is a New York Times bestselling author. Her young adult novel, Piecing Me Together, received a Coretta Scott King Award and Newbery Honor. Her children's picture books and novels for teens have received several awards and international recognition, including an NAACP Image Award nomination in children’s literature. Watson grew up in Portland, , and splits her time between Portland and New York City.

Benny Andrews's work is in the permanent collections of more than major museums, including the Metropolitan Museum of Art, New York; the Museum of Modern Art, New York; and the Smithsonian Institution, Washington, DC. Andrews was a recipient of the Coca-Cola Company Lifetime Achievement Award for Outstanding Leadership, a member of the National Academy of Design, and served as director of the Visual Arts Program for the National Endowment for the Arts. He died in 2006.