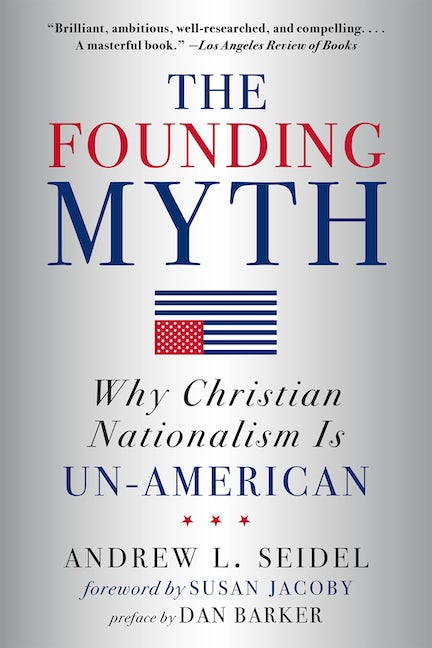 Was America founded on Judeo-Christian principles? Are the Ten Commandments the basis for American law? In the paperback edition of this critically acclaimed book, a constitutional attorney settles the debate about religion’s role in America’s founding.

In today’s contentious political climate, understanding religion’s role in American government is more important than ever. Christian nationalists assert that our nation was founded on Judeo-Christian principles, and advocate an agenda based on this popular historical claim. But is this belief true? The Founding Myth answers the question once and for all. Andrew L. Seidel builds his case by comparing the Ten Commandments to the Constitution and contrasting biblical doctrine with America’s founding philosophy, showing that the Declaration of Independence contradicts the Bible. Thoroughly researched, this persuasively argued and fascinating book proves that America was not built on the Bible and that Christian nationalism is un-American. Includes a new epilogue reflecting on the role Christian nationalism played in fomenting the January 6, 2021, insurrection in DC and the warnings the nation missed.

Andrew L. Seidel lives in Madison, WI, and works as a constitutional attorney at the Freedom From Religion Foundation (ffrf.org), litigating cases involving religion and the Constitution. He has appeared on Fox and Friends, MSNBC, and the O’Reilly Factor; numerous radio shows; speaks and writes extensively about religious freedom; and has been profiled on BBC News, BuzzFeed, International Business Times, and more. Learn more about Andrew at: @AndrewLSeidel on Facebook, Instagram, Twitter, YouTube, and http://andrewlseidel.com/.