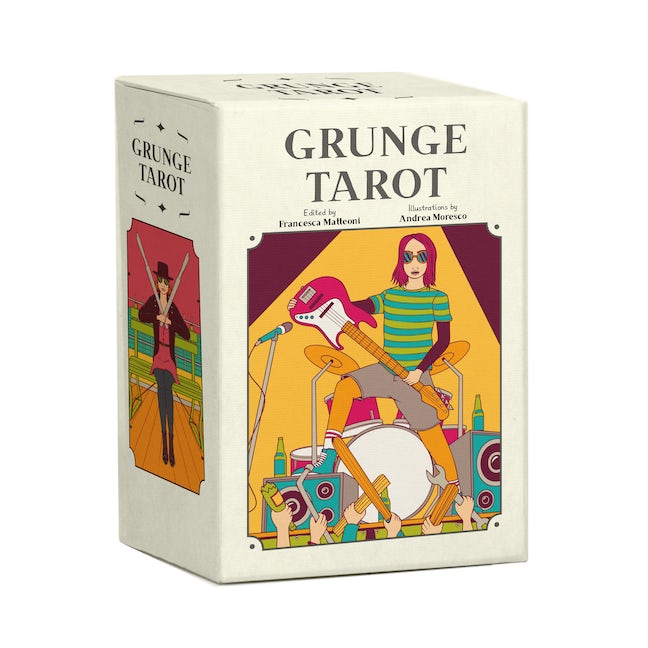 A quirky tarot deck that embraces the culture of 1990s-era Grunge—its fashion, its music, and its personalities.
The word “grunge” originally meant dirty, shabby—now it refers to a raw rock sound that jibes well with the esoteric symbolism of tarot. This deck is an adventure that crosses the mysterious world of archetypes to arrive at the heart of the 1990s and Grunge, the music style from Seattle that has become a cultural reference point the world over. A grain of truth can exist anywhere, even in the pockets of an old, checkered shirt, backstage at a concert, or in the doubts and vulnerability of adolescence. Starting from Grunge, this deck of cards aims to recreate the atmosphere of the restlessness of the era, highlighting the search for identity among extremes. It is the dreamy and transgressive imagination of the Fool that begins every path, ready to lose himself or be redeemed.

Francesca Matteoni teaches history at a number of American Universities in Florence and holds workshops on tarot cards, fables, and poetry. She lived in England, where she earned a doctorate and conducted research in modern history, elaborating the processes of witchcraft, the magic of bodies, and medical folklore.

Andrea Moresco is an illustrator and graphic designer in the music and underground scene. His illustrations combine 1960s visionary and psychedelic aspects, 1980s colors, and 1990s underground culture originating primarily from the music scene.