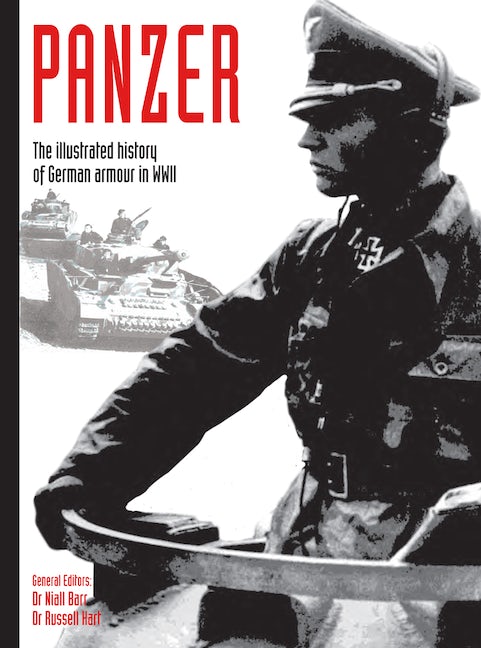 The Illustrated History of German Armour in WWII

The Illustrated History of German Armour in WWII

Panzer provides a full pictorial record of the German armored forces, from the Blitzkrieg years to the last stand in Berlin.

German armored forces were a key component of the Wehrmacht’s Blitzkrieg (“Lightning War”) tactics that quickly conquered Poland, the Low Countries, and France in 1939 and 1940. Germany introduced a new style of mechanized warfare that surprised the Allies and allowed it to overwhelm often numerically superior forces in France and Russia. However, as the war progressed the Allies learned how to counter the German tactics, and in the final years of fighting German armor was on the defensive. This photographic volume, with more than 200 images, presents the full range of Germany’s armored weaponry, from the beginning days of the war through to the large, powerful tanks and self-propelled guns—including the Tiger, King Tiger, and Jagdtiger—that became key to the defense of the Reich as the Allied armies closed in. Additionally, it explores key figures, such as Panzer generals Hoth and Guderian, and aces Michael Wittmann and Joachim Peiper.

Dr. Niall Barr is a Senior Lecturer in Defence Studies at the Defence Studies Department, King's College, London, based at the Joint Services Command and Staff College, Shrivenham. Educated at the University of St Andrews, he has previously taught at St Andrews and the Royal Military Academy Sandhurst.

Dr. Russell Hart is Professor of History at Hawai’i Pacific University. He is the author of Clash of Arms: How the Allies Won in Normandy, 1944 and Guderian: Panzer Pioneer or Mythmaker?