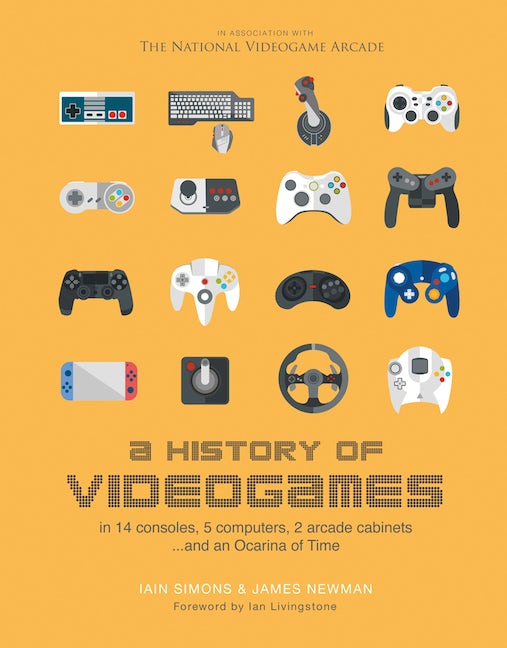 A History of Videogames

In 14 Consoles, 5 Computers, 2 Arcade Cabinets ...and an Ocarina of Time

A History of Videogames

In 14 Consoles, 5 Computers, 2 Arcade Cabinets ...and an Ocarina of Time

From the humble audiocassette to out-of-this-world virtual reality, this is the story of videogames—told through objects!

Most people have played videogames, whether it was Pong way back when or Pokémon Go today. The story of their creation and development is fascinating, encompassing hardware, software, concept, equipment, and more. Now the curators of the UK’s award-winning National Videogame Arcade take you on a journey through joysticks and microchips, Game Boys and cuddly toys, guitars and drums, as they explore how videogames are made, played, and loved. This entertaining history ranges from The Age of Empires III Collectors’ Edition, Barcode Battler, and the Bioshock Xbox 360 faceplate to Dance: UK Dancemat, Packman and Nintendo, Tamagotchi, and Virtual Reality Headsets. Whatever your interest in gaming, from casual player to medal-winning champion, this book’s for you!

Iain Simons is the Director of the National Videogame Arcade, which he cofounded in 2015. As well as leading curatorial and interpretive development at the NVA, he speaks and writes about videogame culture internationally for a wide variety of audiences and has written for both the popular and academic press, as well as several books.

James Newman is Professor of Digital Media at Bath Spa University. He is the author of numerous books on videogames and game culture, including Videogames, Playing with Videogames, 100 Videogames (with Iain Simons), and Teaching Videogames. James has written for the Independent and Edge, spoken about game culture on TV and radio (Front Row, BBC Radio 4; Games Britannia, BBC4), and has given public talks, lectures, and workshops at the Barbican, British Library, and MediaCity.