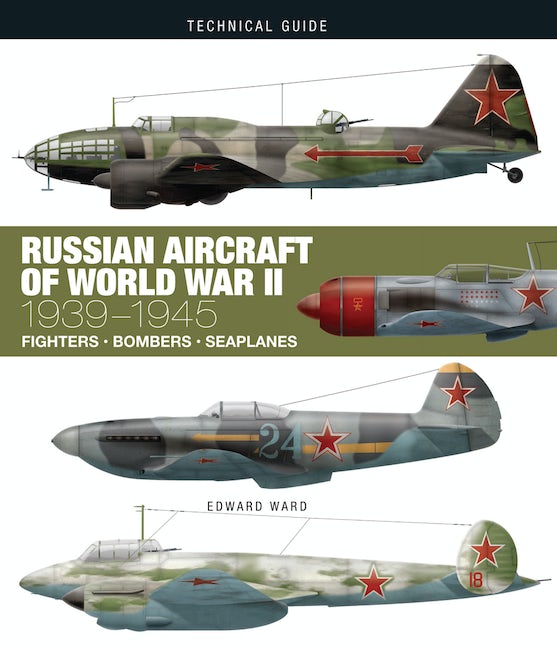 The book provides a comprehensive survey of combat aircraft, from the compact, revolutionary Polikarpov I-16 fighter of the Winter War in Finland, to the Ilyushin Il-2 Shturmovik and Petlyakov Pe-2, two of the outstanding ground-attack aircraft of the Eastern Front campaign. All the major and many minor types are featured, including fighters, dive bombers, ground-attack aircraft, night bombers, strategic bombers, and reconnaissance and transport aircraft. This includes both well-known models, such as the classic MiG-1 fighter and Tupolev SB fast bomber, through lend-lease aircraft like the A-20 Havoc and B-24 Liberator, to lesser-known models, including the Yermolayev Yer-2 medium bomber and Kharkiv KhAI-5 light bomber. Each featured profile includes authentic markings and color schemes, while every separate model is accompanied by exhaustive specifications. Packed with 110 full-color artworks with detailed specifications, Russian Aircraft of World War II is a key reference guide for military modelers and World War II enthusiasts.

Edward Ward is a writer and illustrator who has written on a variety of aviation subjects for over ten years. He has produced many articles for aviation journals both in print and online and is a regular contributor to the Hush Kit aviation blog. Edward lives with his wife and daughter in Sydney, Australia.