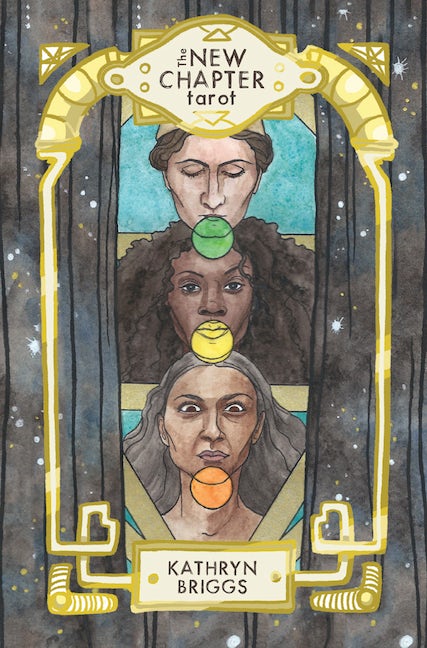 The New Chapter Tarot is a story, a journey, a self-portrait of change.

Faced with the realization that her relationship was coming to an end, Kathryn Briggs' entire life was at an either/or moment. She was an immigrant, on a marriage visa, with no professional contacts and not much in the way of community back home. Was she prepared to blow up her entire life? To risk what was known, for what could be?

"Arting through" her problems, Kathryn painted tarot cards as feelings arose and presented themselves to be dealt with. The Queen of Swords is the friend who offered their shoulder to cry on before giving the keenest advice, the 6 of Disks is the adopted cat who helped her feel rooted and home, Strength is the friend she hadn't seen in 20 years but who had also returned to the strange place they were from but never felt they belonged.

Each card of The New Chapter is a meditation in paint; a feeling arose and it became a card and was released. This completed deck represents a new life, a circle of Hope and Friendship and Love.

Kathryn Briggs is a comic creator, art teacher, and practicing art witch based in the Philadelphia area. Her love affair with comics began in 2012 while pursuing an MFA at Dundee University, Scotland. She has created a variety of zines, comics, and even a deck of playing cards for Ess Publications, the small press she founded in 2013. She is the author and illustrator of Magpie, Triskelion, and Story(cycle), a master’s thesis in comics form.

A foremost expert in tarot, Rachel Pollack's work has helped tarot readers around the world understand the cards better, be they beginners or aficionados. Her tarot book, Seventy-Eight Degrees Of Wisdom, is widely considered to be the quintessential guide. She has several tarot decks to her name — the Shining Tribe tarot, which she illustrated and wrote herself, and two more decks that she co-created with Robert Place. Having written several magical realism and sci-fi books, Pollack has won accolades such as the Arthur C. Clarke award for her work as an author. She has also worked on such cult-hit comics as Doom Patrol (Doom Patrol is currently an HBO series entering series 3).