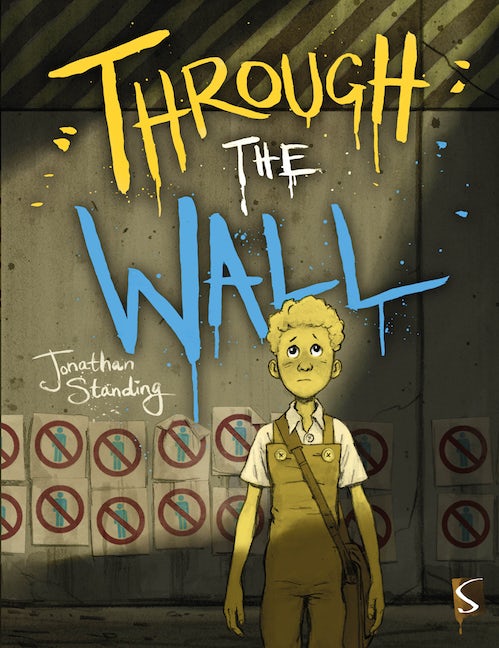 This stunningly illustrated graphic novel—a debut from the hugely talented Jonathan Standing—delivers an important message about overcoming prejudice and fear of the other.

Attn: An Important Message to All Citizens Living in the Shelter of the WallThe Wall, our greatest achievement, provides security and ensures peace. Its colossal size shelters and unites us. The Wall gives us hope for a prosperous and civilised future by keeping us free from the undesirables who live on the other side of it.
This powerful graphic novel tells the story of a giant wall separating two civilizations: one of blue people and one of yellow. Each side is forbidden to speak to the other; crossing the wall—or even finding out what’s on the opposite side—is treasonous. But one day, a boy peers through a hole in the wall . . . and finds himself staring at a girl from the other world. Together, they decide to break down the boundaries that divide their peoples forever.

Jonathan Standing has worked as a concept artist and visual designer for video games and television, including The Boys on Amazon Prime, and now divides his time between being Professor of Animation at the Savannah College of Art and Design and writing and illustrating books. He holds a BA in Fine Art from the University of Northumbria and an MA in Illustration from the University of Hertfordshire. Through the Wall is his first book.